Downtown discovery: Gems of the past 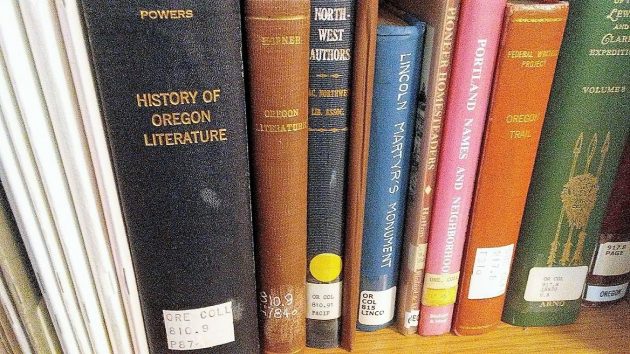 The History of Oregon Literature on the left is a treasure all by itself.

Pretty much by chance the other day, I found myself in the basement room that holds the Oregon Collection at Albany’s Carnegie Library downtown. It’s the place to be if you’re interested in what happened in our town and state long before you and I got here.

The collection is not big. But it is varied.

You want to know if somebody with your last name lived in Albany more than a century ago? Check the city directories going back to the 1880s. (In my case, I learned that one Ella Hering resided at 624 Broadalbin St. in 1911. No relation, I’m pretty sure, but I was glad to learn she was here.)

What really caught my attention was an 800-page “History of Oregon Literature” by Alfred Powers which came out in 1935. It’s full of great stuff, including a long public letter in 1871 by Minnie Myrtle Miller on the occasion of husband Joaquin Miller returning to Oregon after many years away and leaving his family to nearly starve.

Speaking of the celebrated poet, in an editorial the Albany Democrat accused Joaquin Miller of plagiarism. As Miller came back from Europe in 1871, the Democrat wrote that he had “become a man of fame in London. The fact makes us think no more of Miller, but much less of the Londoners.”

The “History” has a chapter on newspaper columnists, including the Democrat’s Fred Nutting, whose “Misfits” column sparkled with gems like this in 1900: “It is a mighty mean kind of man who will talk about himself when you want to talk about yourself.”

I also liked this one by Arthur Perry, who for 24 years, starting in 1911, wrote “Ye Smudge Pot” for the Medford Morning Sun and then the Mail-Tribune: “Del Getchell picked up a door nail in front of his bank. Yes, it was dead.”

Was that literature? Maybe not. But if columnists served up bits of harmless humor on a regular basis, maybe newspapers these days would be in better shape instead of being on the way out. Or, as I said, maybe not. (hh) 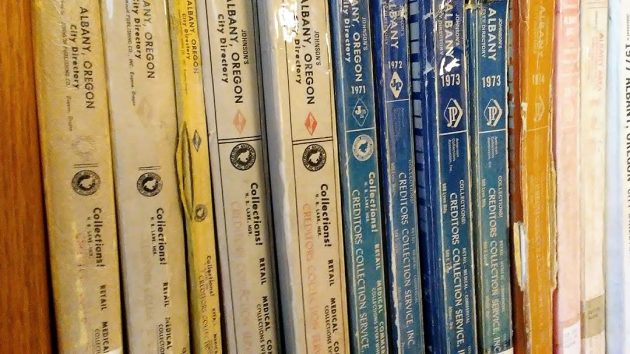 Some of the Albany city directories stored in the Carnegie Library’s collection on Oregon’s history.


2 responses to “Downtown discovery: Gems of the past”