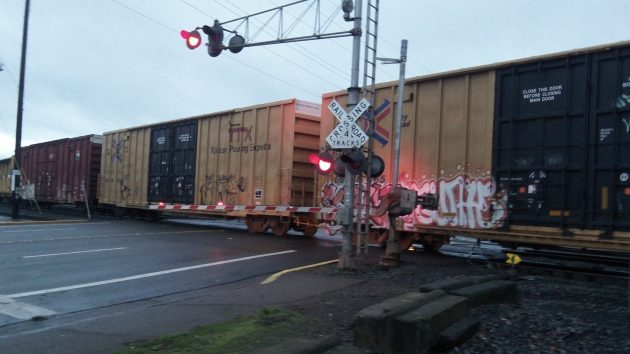 ODOT would like to put a pedestrian crossing gate here.

ODOT-Rail has an idea for trying to prevent people from going around the closed crossing gates on Albany’s Queen Avenue and getting run over by trains. It involves, among other things, eliminating one of the two westbound traffic lanes and might cost around $1 million in federal funds. At least three members of the city council have reservations, and they expressed them Monday.

The concept stems from a discussion last spring by officials of the city, ODOT and the Portland & Western Railroad. It calls for installation of additional crossing gates plus fencing to make it all but impossible for drivers, bicyclists and people on foot to go around the gates when they are closed. But there isn’t room for pedestrian gates westbound, so the idea is to narrow Queen Avenue to one traffic lane westbound and put a sidewalk were the right lane is now.

Councilors Bessie Johnson, Rich Kellum and Bill Coburn voiced objections or concerns. If the gates are down and the lights are flashing and the warning bells are ringing, how much more needs to be done to let people know to stay the heck off the tracks? Especially at great expense? And why complicate traffic on this main crosstown link by eliminating one lane? Those seemed to be the prevailing sentiments. Councilor Ray Kopczynski, though, seemed receptive to the concept, especially if it saves lives.

Richard Shankle, manager of the crossing safety section in ODOT-Rail, said there had been 10 crashes at the crossing over 40 years, and the last two resulted in the deaths of people on bicycles who went around the gates in front of a train. The Democrat-Herald earlier quoted Shankle on the $1 million cost estimate. The work would be done in 2019. It would include the lane reduction, added gates on both sides of the street and both sidewalks, plus smooth concrete panels between the rails. ODOT official Frannie Brindle said her agency would also consider “gates down” signs on nearby Pacific Boulevard and farther east on Queen, giving motorists notice so they can avoid the crossing when it’s closed.

The problem at the four-track crossing comes when a train being built at the Albany yard has cleared the street but the gates stay down. People may go around the gates thinking the coast is clear, unaware that the gates are still down because a train is approaching on the mainline.

Underlying the discussion at Monday’s council work session was that ODOT had given the Portland & Western nearly $7 million under the Connect Oregon program so that more train-building could be done at the Millersburg yard instead of at the Albany yard. The project was completed in 2014, but if this has reduced blockages on Queen Avenue, nobody seems to know.

In its application for the state money, the railroad promised to reduce switching 50 percent at Albany and at a siding off Highway 20 near Granger, according to Shankle. But nobody took a count to establish a baseline, so the state has no way to enforce any reduction in switching or blockages of the crossing. Shankle said, however, that state officials are not pleased and have awarded the company no additional Connect Oregon money as a result.

The upshot: The council told the city staff to keep working on the crossing issue. But it’s not at all clear that the lane reduction will ever get the council’s OK. (hh)