Council gets request for parking ban 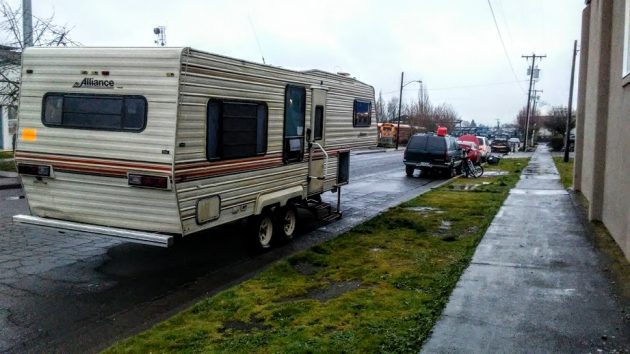 This is 11th Avenue near Jackson Street on the evening of March 6. Parking there without a permit would be prohibited under a city proposal.

In order to control “unlawful activity,” Albany’s code enforcement official is asking the city council to ban parking without a permit on 11th Avenue near the Signs of Victory homeless shelter and on four other nearby streets.

The proposal by Kris Schendel, the code enforcement official attached to the police department, is on the agenda of the council’s 4 p.m. work session Monday (March 9) in the form of a suggested ordinance.

The ordinance would set up a “Central Albany Parking Area” where it would be unlawful to park on the streets without a permit. Businesses would get one permit per employee plus additional permits for visitors.

According to the draft on the agenda, the intent is to “address areas within the city (where) unlawful activity has increased.” Having the permit requirement on those streets would “allow law enforcement personnel to more readily address the unlawful activity.”

“Unlawful activity” is not explained.

Also on the council’s Monday agenda as proposed by Schendel: An ordinance to ban the feeding of wildlife other than songbirds and water fowl, and a code amendment that would bar property owners from allowing, on their property, the use of vehicles for “sleeping or housekeeping.”

If the council likes any of those ordinances, it can act on them Wednesday night when they are on the agenda again. (hh)

Postscript: As the city’s Marilyn Smith notes in the comments below, a map originally posted with the agenda was mistaken about the extent of the proposed parking restriction on Howard Drive. But the description in the ordinance is puzzling as well. It says the permit requirement would apply to Howard Drive “north of 13th Avenue SE to dead end.” Google Maps says that short section of street is called Industrial Way, but in fact there’s a street sign that says Howard Drive.

21 responses to “Council gets request for parking ban”