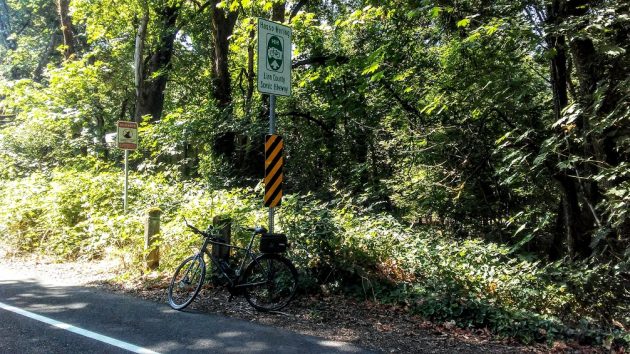 The start of a Linn County scenic bikeway just outside Albany on Bryant Way.

One of my bike routes from Albany goes out Riverside Drive and turns right on Bryant Drive for the return. I’m in town one minute and in the middle of the country 60 seconds later.

Bryant Drive quickly turns into Bryant Way. And in 10 minutes, after riding past orchards and fields and a detour through Bryant Park, I’m back on city streets. For this clean dividing line between urban and rural, I think we have Oregon’s land-use laws to thank.

Urban growth boundaries were established as part of the statewide scheme of land-use planning and regulation in the 1970s.

Amazingly, despite various initiatives to change other parts of the original principles over the years, the growth boundaries are still with us. And in this part of the valley, away from the metro area, you can clearly see their effect.

The deal is that outside of cities, it’s very hard or impossible to develop land for anything other than farming or forestry. Cities can’t expand outside their growth boundaries, set decades ago. And changing the growth boundary is hard.

The law has critics, obviously. You sometimes hear that Oregon’s approach to land use is to blame for a shortage and therefore the rising cost of housing. Maybe that’s so. But not being surrounded by endless subdivisions is a benefit that can’t be ignored.

Anyway, whatever the social costs of not letting cities spread out, I appreciate being able to get on the bike and ride out of town without having to go far.

12 responses to “Close to town, there’s the open road”