City proposes a use for former RR land 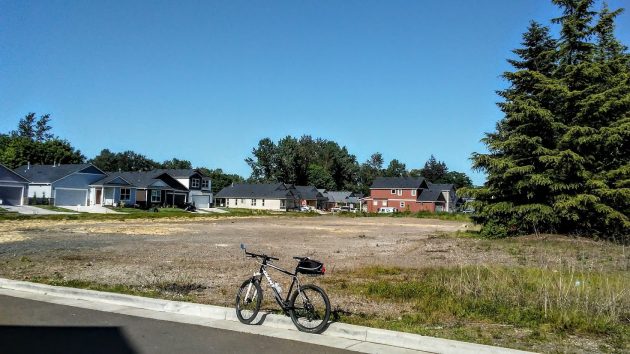 The vacant city-owned lot at Edgewater Village looked like this in May 2020.

More housing. That’s what may be in store for a vacant property the city of Albany owns along the old Oregon Electric Railway track on Water Avenue.

Albany has owned the roughly one-acre site since 2013, when the city got the BNSF railroad to hand it over as part of the price of renewing the railroad’s city franchise to keep using a section of Water Avenue for its track.

I’ve reported on this property before, and you can read the latest story here.

Now, the staff is asking the city council to declare the property surplus and then make it available “for the development of needed housing.”

The question is on the agendas next week, for discussion during the council’s work session Monday afternoon, and for action during the regular session Wednesday night. Both meetings will be virtual, and people can watch online.

The lot is zoned for a variety of uses related to the “waterfront,” including housing up to a density of 10 units per acre.

“One of the most effective and low-cost ways the city can support the development of housing is by making city-owned surplus land available for needed housing,” city planner Anne Catlin wrote in a memo to the council.

If the council agrees, the staff would solicit proposals from developers.

The council also could specify what type of housing it wants there. That might include “long term affordable” dwellings, either rented or owner-occupied, for people with less than average income; or so-called “workforce housing,” whatever that means; or a particular type of housing or a mix of types, including apartments or townhomes, and so forth.

The lot has an address, 205 Madison St. N.E., but the Madison Street railroad crossing has been closed. Access would be via Main or Hill streets, like for the rest of the Edgewater Village development of single-family houses and townhomes. (hh)


6 responses to “City proposes a use for former RR land”