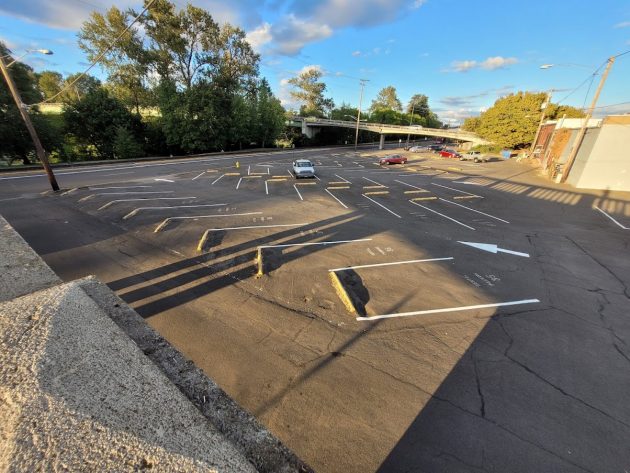 The city-owned parking lot on Water Avenue between the Ellsworth and Lyon Street bridges one evening in August 2021.

Albany has approved a site plan for redoing a Water Avenue parking lot in order to make it fit in with the planned riverfront redevelopment. The estimated cost is $182,000.

The community development director approved the plan on Dec. 29. Details are described in a 44-page report by the planning staff, which recommended approval.

The half-acre lot is on the south side of Water Avenue between the Lyon and Ellsworth Street bridges. According to the plan, it will be resurfaced, remain a public lot, and be restriped for 75 spaces, up from 63 now. (My story on the project in August said it had 50. I must learn to count.)

Four access points on Water will be closed, and one access under each of the bridges will be improved.

There will be a sidewalk on Water, separated from the lot by a curb, a narrow strip of gravel and four catch basins for runoff.

The application for site plan approval was written by part of the consultant team working on the riverfront redevelopment. It’s not clear from the paperwork whether the cost will be borne by the CARA urban renewal district, which is sponsoring the riverfront project, or by some other city fund.

The lot now lacks “accessible spaces” for vehicles driven by disabled drivers, and the plan does not add any. But even without those, the staff report says the other changes will bring the lot into closer compliance with city development standards.

This looks like the first concrete project related to CARA’s riverfront endeavor. The overall plan calls for changes all along Water Avenue, in Monteith Riverpark, and on the Dave Clark Path.

The paperwork doesn’t say when the lot is supposed to be redone. We’ll find out when either the urban renewal agency or the city council (the same people but acting in different capacities) calls for bids. (hh)