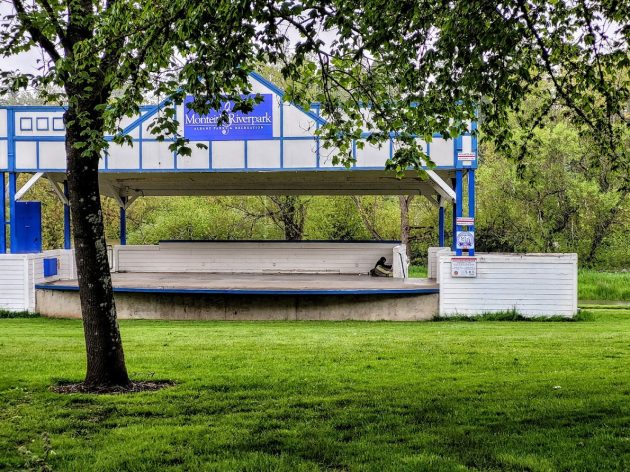 The stage in Monteith Riverpark on Sunday (complete with a guest). The stage to be replaced as part of Albany’s Waterfront Project.

Albany is plowing ahead with its $16.2 million project to upgrade the Willamette riverfront, but it’s not a unanimous decision.

Acting as the Albany Revitalization Agency in charge of the CARA urban renewal district, the city council voted 5-2 late Wednesday to use an alternative contracting method for the project.

Councilors Matilda Novak and Dick Olsen voted no. It’s not the contracting method they object to, though Novak didn’t like it when the council last month rejected bids for the first part of the project including the low bid from an Albany contractor, Pat Ryan.

What Olsen and Novak object to is spending that kind of money — $15 million of the budget comes from CARA — on a project whose value they question, leaving no money for other improvements downtown.

The riverfront project calls for changes in Monteith Riverpark, including a new stage; sidewalks and other amenities along Water Avenue from the park to the railroad trestle at Lafayette Street; and some work along the Dave Clark Riverfront Path.

Also Wednesday night, the ARA/council got a request — not mentioned on the agenda — from Sybaris restaurant owner Matt Bennett and his architect, Bill Ryals, for an $800,000 loan to help the restaurant restore the historic Oregon Electric depot downtown, which the Bennetts are in the final stages of buying so they can move the restaurant there.

Olsen and Novak were ready to approve a loan, but the mayor and other councilors refused on the grounds they wanted to know more about CARA’s so-far failed effort to do something with the former Wells Fargo branch, for which the city paid $1.5 million. They invited Bennett to come back later.

Gerding Builders, and before that a consortium that included Bennett and others, pulled out of CARA-supported bids to acquire the old bank and rebuild, enlarge and repurpose it. They found it was not economical.

The Wells Fargo project looks dead, but CARA staffer Seth Sherry said it’s not. The CARA advisory board is supposed to meet in June to consider what the city might do with this building.

On the waterfront project, the city will now request proposals for a construction manager who will oversee the project, review the plans, and then take bids from contractors to build the individual parts. This “construction manager/general contractor” method was described as better suited to a complicated project like this.

This approach will probably push the start of construction into next year. When the project will be finished, or how much of it can be accomplished given the galloping inflation in construction, no one can say.

There has been a vague talk that the work will encourage private investment along the riverfront. But I haven’t heard of any concrete plans, let alone commitments. And given the existing uses along Water Avenue, plus the railroad track between the river and the street, it’s hard to see what kind of private redevelopment could take place. (hh)