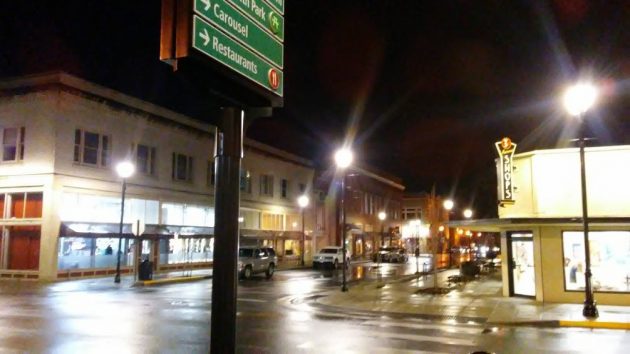 Downtown, in the heart of the CARA district, at about 5 o’clock on Wednesday night

CARA, Albany’s downtown urban renewal district, was created in 2001 and originally was scheduled to last until 2027. Now it’s expected to expire in 2033.

When the city council set it up, the Central Albany Revitalization District had a list of 50-some projects and the authority to borrow and spend up to $56 million.

On Wednesday the CARA advisory board received a financial analysis by an outside consultant, Tiberius Solutions LLC. It showed that CARA had used up $34.5 million of its authority, meaning it has $21.5 million yet to borrow and spend. Some of that has already been obligated for various projects including redevelopment of the Willamette riverfront.

Tiberius is projecting that CARA will reach the end of its borrowing authority in 2022 and will start levying less than its full tax after that. Its debts are expected to be paid off in 2033, and that’s when CARA must cease.

The urban renewal program is financed with taxes on the added property value within CARA since the district was formed. Those tax amounts would normally go to the city, county, schools and others but are diverted to the urban renewal district instead. The theory is that the added value created by urban renewal will pay off in higher tax revenues for the regular taxing units once CARA ends.

Through its life so far, CARA has received about $35 million in property taxes that otherwise would have gone to the other local taxing districts. According to tables published by the Linn and Benton County tax departments, this fiscal year the city of Albany is giving up about $1.5 million to CARA, the school district about $1.1 million, and other taxing units smaller amounts.

The consultant reports that the assessed value of the CARA district grew about 3.7 percent annually from 2003 till now, from $266 million in 2002 to $490 million in 2019, or about 84 percent overall. I looked up county tax reports, and they show that the assessed value of the Linn County portion of Albany, including the CARA district, grew by 64 percent during the same period.

Although there’s no information about how much of the CARA increase was caused by urban renewal, the comparison suggests that the district outperformed the rest of the city in assessed-value growth, in Linn County anyway, and that CARA-assisted projects such as Jefferson Lofts, the Wheelhouse, Edgewater Village and others were the reason.

Meanwhile, CARA is working on a couple of downtown real estate deals including the previously announced redevelopment of the former Wells Fargo bank. Wednesday’s CARA agenda at first included an update on that venture, on which the city is working with a group including Coastal Farm owner Buzz Wheeler and Sybaris Chef Matt Bennett. But that item was scratched, and Bennett and Wheeler instead appeared before the city council, acting as the Albany Revitalization Agency, in an executive session closed to the public.

Before the meeting, I asked Wheeler and Bennett about the Wells Fargo plans. They said they were still working on them. Their group has an option to buy the bank branch from the city if the two sides can reach a development agreement. So, more on that later, maybe when CARA and ARA meet again on Jan. 15, 2020. (hh)