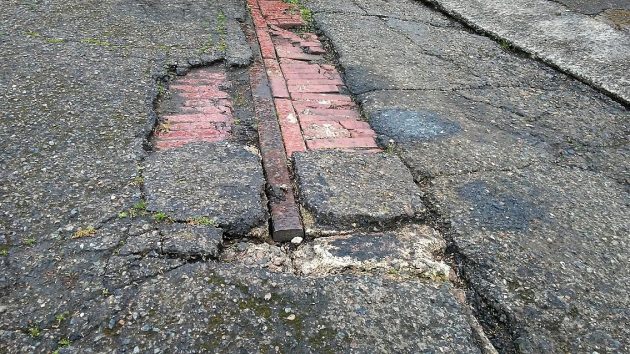 If they ever get around to repaving central Albany’s old streets, I hope they don’t tear out this rusty reminder of the city’s history in advanced — for the time — passenger rail.

This broken rail in the crumbling pavement of Fifth Avenue is what’s left of the Oregon Electric track that once ran the length of the street from the west end of town to Main Street in the east.

You can find summaries of the Oregon Electric’s history online. It was built starting in 1906, went south from Portland and reached Albany on July 4, 1912, and Eugene later that same year. A branch went went to Corvallis from a point called Gray, a little south of Pirtle. There were several trains a day. Maxine Humphrey, who grew up on her family’s Oakville farm and died in 2008 just short of her 93rd birthday, once told me she rode the Electric to go to high school in Albany in the 1930s.

The line was doing great for a while, carrying passengers in well appointed cars, and earned a profit of $1 million in 1920. But it went downhill from there because buses and private cars were catching on. Service to Corvallis was stopped in 1931, and all passenger service on the line ended in May 1933.

The Albany station now is Ciddici’s Pizza. That’s where the steel rails have begun to re-emerge after being paved over years ago.

I checked old USGS maps. The track along along Fifth Avenue still appears in one from 1944. But by 1957 it was gone, at least according to the map.

We know it isn’t really gone, just covered up, at least in the block of Fifth east of Lyon. I went along Fifth for several blocks. The pavement is worn out, but without digging or deploying a metal detector, whether the rails are still there underneath all the cracks is impossible to say. (hh) 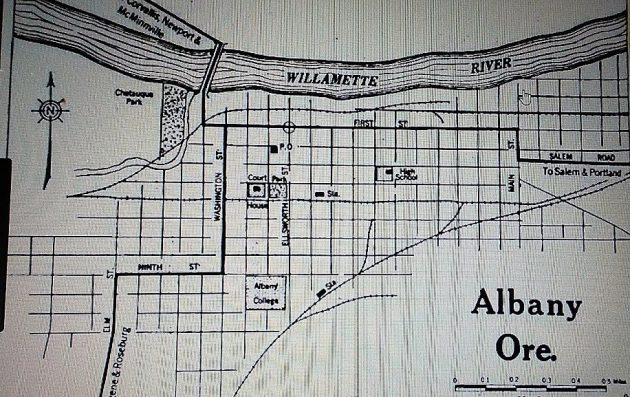 This map dates from 1917. It clearly shows the Oregon Electric and its station on Fifth Avenue.