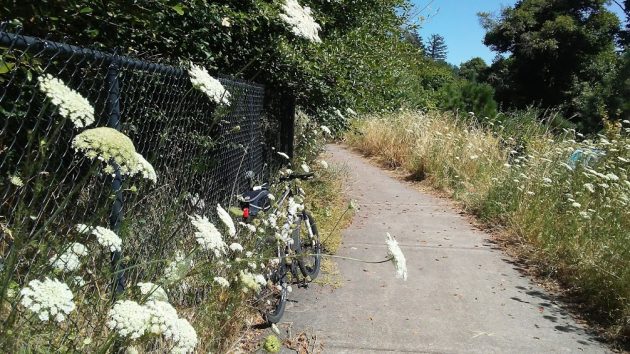 Weeds along the Cox Creek path on July 19, an apparent sign of cutbacks in parks funding.

Albany residents might as well get ready to expect cutbacks in city programs and services over the next few years.

The city council Monday got the same message it has received several times since the winter of 2019: Expenses are growing faster than income. And now the coronavirus outbreak is making things worse.

The message came from Manager Peter Troedsson in the form of budget projections over the next five biennia, by the end of which, in 2029-31, Albany’s general fund might be around $88 million short, with projected expenses of $140 million and only $52 million coming in.

The margin of error in these projections is significant, Troedsson cautioned. Still,”inevitably services will have to be cut.”

There will have to be cutbacks in everything from parks and planning to libraries and code enforcement, and police and fire services. One program that might be spared is the city buses, which are paid for with state and federal funds.

As before, the council kicked around a few ideas, such as starting a business license and registration program, sharply increasing the penalties on people doing construction without permits, and adding a city utility charge to the monthly water and sewer bills. None of them likely would come close to closing the funding gap, projected at $5.4 million in 2021-23.

Councilors wanted to know if there was enough time for them to call an election on a utility fee before the November general election. Troedsson will come back to them on that question at the next council work session in two weeks.

The structural imbalance between city expenses and revenue has been a known problem for a long time. But now there’s the virus. As Troedsson put it, “The pandemic has made an already serious situation even worse.”

Expect to hear more about this before, eventually, some Albany city programs and services will either slow down or be cut. (hh) 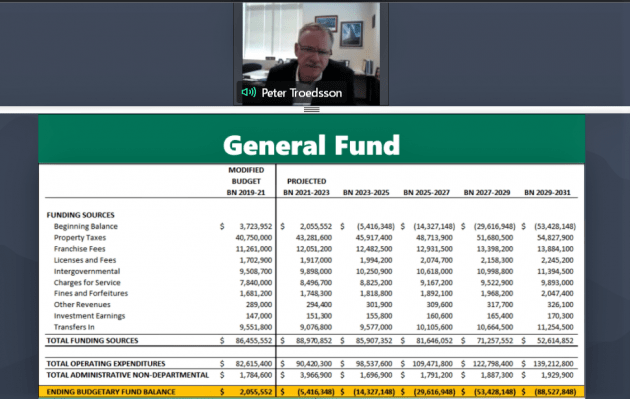