At Albany Station, waiting for a train… – Hasso Hering

At Albany Station, waiting for a train…

Albany once was served by 50 passenger trains a day. Now there are six. But that’s still better than nothing, I’m thinking as I’m waiting for Cascades Train 507 to arrive from Portland Tuesday night.

The trains we have, the Coast Starlight and the schedules of the Amtrak Cascades, serve travelers going north and south in the I-5 corridor. I haven’t taken one lately, but I’ve been to the station to see people off and pick them up.

It would be nice if Albany Station was open longer hours, though I understand why it can’t be. As it is, passengers arriving on No. 507 can’t check their bags in Portland, no matter how heavy. With the station closed by the time the train arrives in Albany, there’d be no one to unload or retrieve them.

The Coast Starlight trains are long. As I noticed earlier Tuesday as train No. 11 stopped at Albany Station, passengers might benefit from guidance as to where on the long platform to board their assigned car. As the video shows, a few people hiked from one end to the other and back before a conductor opened the right door and helped them get on.

Speaking of trains, you may be wondering whatever happened with the big plan to upgrade passenger rail between Eugene and Portland. That project was begun in late 2011. Just last fall ODOT conducted public meetings, including one in Albany,  about the draft of an environmental impact statement. A final statement choosing a preferred route is to be published this year. Then nothing more will happen until the feds come up a few million dollars for track improvements and lots of other things. In other words, people now retired won’t live to see expanded passenger rail.

As for those 50 trains? I got that nugget from Polk’s Linn County Directory of 1913. Of Albany, the directory said the town of 7,500 was “connected up with all the surrounding country by many radiating railway lines, and has passenger service at the present time of fifty trains a day.”

That’s the sort of thing you remember reading when you hang around Albany Station on a winter night, waiting for a train that’s half an hour late. (hh) 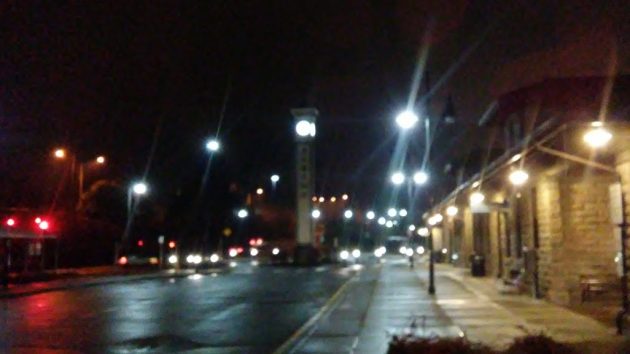 Outside Albany Station, between trains, on a winter night.

11 responses to “At Albany Station, waiting for a train…”