Answering a question on Highway 20 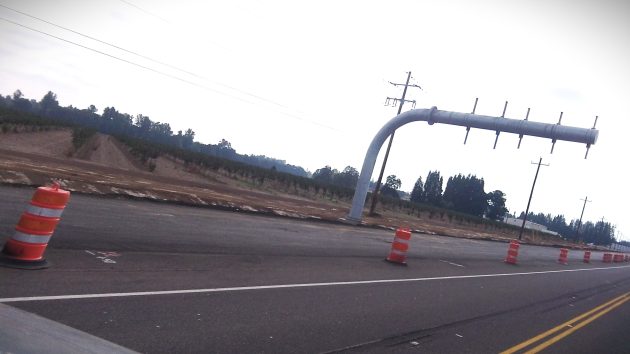 That’s the kind of cockeyed photo of a highway feature you get when you try to photograph it at 45 miles an hour, holding a little camcorder out the sunroof without being able to see the viewfinder.

Commuters on Highway 20 between Albany and Corvallis will recognize this thing. It’s the signal mast over the newly rebuilt eastbound lanes of the Albany-Corvallis Highway between Granger Avenue and Independence Highway.

Why was I trying to take that shot while driving by? Because it’s a contruction zone and there’s no place to pull off the road and stop.

And why take it at all? To illustrate my answer to a reader’s question on Sept. 23.

“Hasso,” Grace asked, “have you seen that giant, silver monstrosity recently erected on Hwy. 20 between Independence Hwy. and Granger? If so, do you think they’re putting in a light?”

No, ODOT has made it clear it does not want traffic signals at Granger or Independence, two notorious intersections where making a left turn is taking your life in your hands.

Instead, this massive signal mast arching over the highway will hold a couple of signs, as shown in a still from ODOT’s video illustration of the work now going on there: 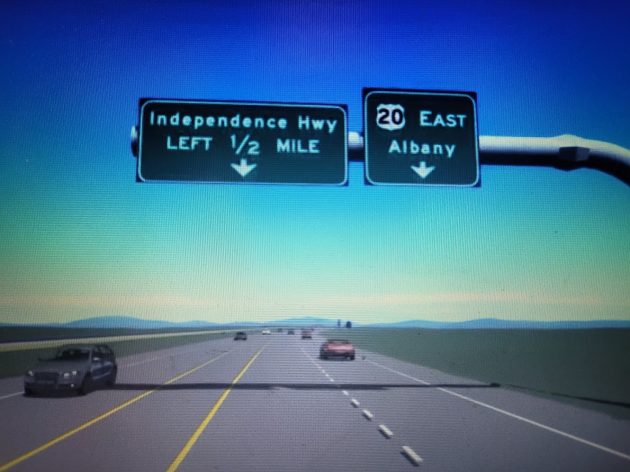 If you want a refresher on this project, which is Phase 1 in ODOT’s Highway 20 safety project, check out the agency’s website here.

In summary, instead of installing traffic signals on Highway 20, the agency is building left-turn refuges and acceleration lanes at both Granger and Independence.

These lanes are intended to let motorists make left turns on to Highway 20 after waiting for a gap in only westbound traffic.

That should make left turns less of a nail-biter when traffic is heavy. We’ll see how it works when the construction is finished. According to ODOT, this is supposed to be in August 2023. (hh)


14 responses to “Answering a question on Highway 20”