An Albany historic house, all boarded up – Hasso Hering

An Albany historic house, all boarded up 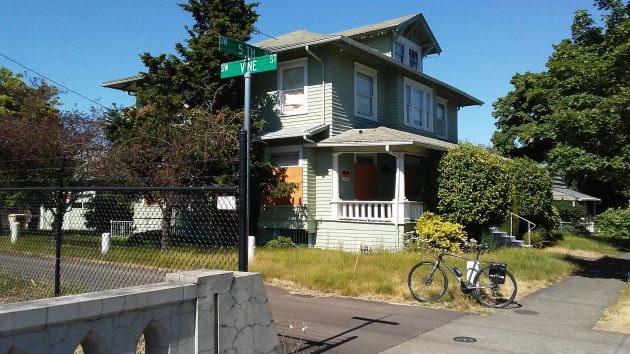 Plywood on the doors and windows is not what you expect to see on one of the stately old houses in Albany’s Monteith Historic District. Which is why the boards caught my attention as I was riding past 637 Fifth Ave. S.W. in recent days.

County tax records list two owners with that as their address. But the place appears unoccupied, and I have no way of reaching them to ask about the situation. On the off-chance that the house was closed due to some enforcement action, I checked with City Hall and the police.

Public Information Officer Marilyn Smith says the owners boarded up the place toward the end of May after evicting the tenants “due to ongoing criminal activity.” The police had been called to the address more than 30 times since January.

On May 28, Kris Schendel, the city’s code compliance officer, posted a “derelict property” notice on the house because of junk and tall grass, and because the boarding-up was done with plywood instead of the kind of clear panels required by the municipal code. The owners were given 30 days to take care of those items, but as of June 13 had not responded.

The house, with two stories and a basement, is listed as one of the sights on the self-guided tour of places to see in the Monteith District. According to the tour pamphlet, it was built in 1909 in the “transitional box” style by Mr. and Mrs. J.J. Barrett. They owned the Barrett Brothers store, which sold everything from machinery and hardware to harnesses and saddles.

At the police department, Lt. Travis Giboney told me he understood the owners hoped to remodel the house. Presumably he meant the interior, because the outside looks fine. (hh)

One response to “An Albany historic house, all boarded up”