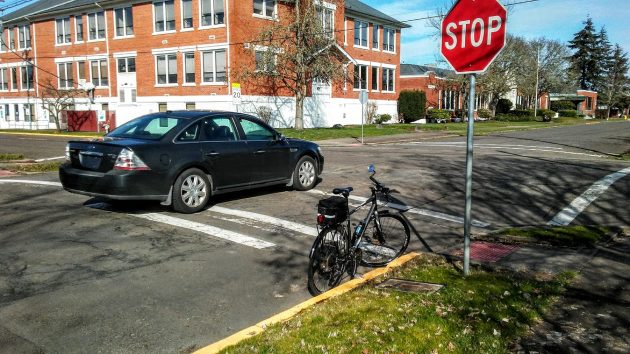 Fourth Avenue is one Madison Street intersection set for safety upgrades. The other one is Fifth.

Two Albany advisory commissions would like the city to go ahead and improve Madison Street from Pacific Boulevard to First Avenue as a “bicycle boulevard.”

Last month, the Bicycle and Pedestrian Advisory Commission “voted to move forward with a possible bike boulevard,” Chairwoman Ann Ketter reports. On Monday, the Traffic Safety Commission did the same.

(I listened in on both meetings but had to ask about what happened because I fell asleep before the panel voted.)

A bike boulevard means making changes intended to slow or calm motor traffic, such as speed humps, while encouraging bicyclists to use the route. This requires consultation with the neighborhood as well as city council approval.

Steph Nappa of the traffic panel volunteered to work on outreach to the neighborhood.

Albany’s transportation systems plan envisions about half a dozen bike boulevards, and Madison Street is one. The city has not pursued the idea, waiting for neighbors to request action, and no one has.

With or without incorporating the boulevard concept, the city is moving ahead with a bike safety project on Madison, funded by a grant of about $160,000 from ODOT.

There had been about five car-bike crashes on Madison over five years, at the Fourth and Fifth Avenue intersections. Madison is a through street there, with stop signs on the side streets. As explained by Ron Irish, traffic systems analyst, the crashes happened when drivers stopped as required but then moved forward without seeing the bikes.

At the intersections, changes will include green paint on Madison to remind drivers to watch out for cyclists.

The ODOT funding has been approved, but now that project presumably will wait until a decision has been made on adding the boulevard elements, which I gather from the discussion would add about $60,000 to the cost. If the city goes ahead with the boulevard, design would happen this year and construction in 2022.

This may not be the most riveting item in anybody’s life, but if you’re interested in how it comes out, stay tuned. (hh)