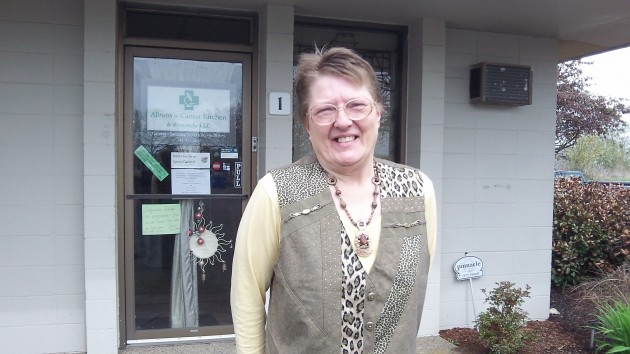 Rhea Graham runs Canna Kitchen, which could remain under an ordinance the council will consider in two weeks.

Albany may get by without a one-year ban on medical marijuana dispensaries, but the city council is dragging out the decision for another couple of weeks. On Wednesday night, Mayor Sharon Konopa broke a 3-3 council deadlock and voted down a one-year city “moratorium” on allowing medical marijuana shops. But she vowed to ask for reconsideration and to support the ban unless the council enacts a law to keep pot shops away from residential areas.

The council had before it a proposal to do just that, but it could not muster unanimous consent to advance it to a second reading by title only. This meant the council will act on the second reading at a work session April 21 or the following regular meeting on April 23.

Oregon law now allows medical marijuana dispensaries, but the 2014 legislature also allowed local governments to ban them for a year providing the ban is enacted before May 1, and also to impose “reasonable regulations” on their locations and operations.

Although no one mentioned it, Wednesday’s moratorium proposal failed because it also would have forced out of business Canna Kitchen, a business on Ferry Street that changes marijuana plant material into other forms such as liquids and salves. Councilman Bill Coburn says he wants the kitchen to be allowed to stay. Accordingly, he voted against the ban. So did Ray Kopczynski and Dick Olsen, who long ago declared their opposition.

The backers of the ban were Councilors Rich Kellum, Bessie Johnson and Floyd Collins. Before the vote, the audience heard them repeat their objections to medical marijuana, including that it was against federal law, that the Oregon medical marijuana program was being abused, and that in 2010, an initiative allowing dispensaries was defeated in Linn and Benton counties as well as statewide. Kellum even read his oath of office, in which he pledged to uphold the Constitution.

The proposed ordinance with further regulations of marijuana shops would keep them at least 300 feet away from any legal “residential use,” but shops in industrial zones — which covers Canna Kitchen — would be exempt.

So is it settled? Not quite. Olsen once said he was against both the ban and additional regulations. If he votes against the regulation ordinance and the ban backers do too, that proposal dies. In that case, according to what the mayor said, four votes could bring up the ban again, and then she would vote for it. She’s adamant about keeping dispensaries away from residences, fearing that one might be set up in the “neighborhood commercial” zone under state law. And according to what she said Wednesday, she’ll try to prevent that even it means the shops are completely banned for a year. (hh)