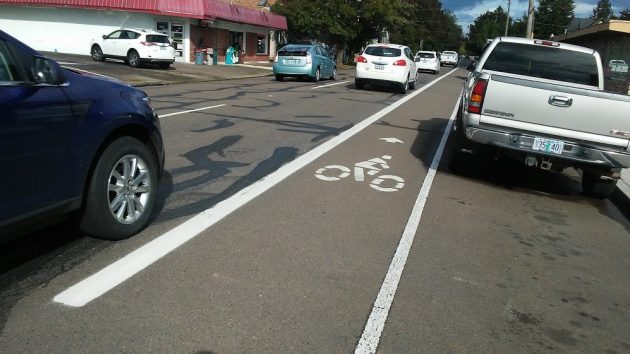 A newcomer to Albany asked me about the best bike route from the Monteith District to Heritage Mall. I gave him my opinion, and the question reminded me of a couple of other things regarding riding bikes in Albany.

If you want to avoid heavy traffic, one way to reach the south Albany shopping area from anywhere near the Monteith District is to go toward the river first, then head east on Second or Water Avenue, and turn south on Geary. If you choose the Second Avenue route, take Main and Santiam Road until you get to Geary for your right turn.

This lets you avoid the treacherous Pacific Boulevard viaduct. And the signals on Geary are nicely timed to get you safely across the many traffic lanes of Pacific and Ninth Avenue.

The other two things?

Number one: Last fall the League of American Bicyclists again gave Albany a bronze designation as a bicycle-friendly town. From my perspective, it rates better than that. Except for two or three places where it’s hard to maneuver, getting around town on two wheels is easy.

One thing that makes it easy is that 96 percent of Albany’s network of main, high-speed roads has bike lanes. That’s nearly three times the percentage of the average town with the next-higher or silver rating

Number two: There’s something odd about Oregon law on bike lanes. The law says drivers going 35 mph or faster must give cyclists a wide berth, wide enough not to hit cyclists if they happen to fall on their side. That could be 6 or 7 feet, or even more. But, strangely enough, the law does not apply when there’s a designated bike lane. In Albany this means that drivers on all the high-speed roads can pass cyclists within inches, and as long as nothing bad happens that’s OK.

On Facebook Monday, somebody made a long argument in favor of amending the safe-distance law to translate the vague standard of “if they fall into the road” to something specific. But at least the exception for bike lanes ought to be fixed.

Passing a fix to the safe-passing law would be a fitting memorial to Donald L. Stathos, the state representative from Jackson County who got the legislature to pass the Oregon Bike Bill in 1971, and who died in Medford in 2005. (hh) 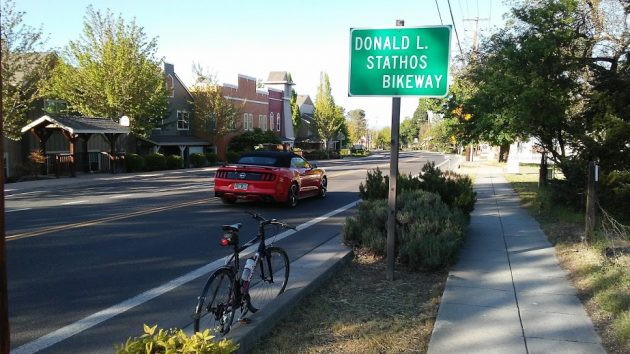 Rep. Don Stathos is remembered on this bike lane in Jacksonville.

12 responses to “Albany bike routes and a bronze rating”