Albany asks that trains be funded 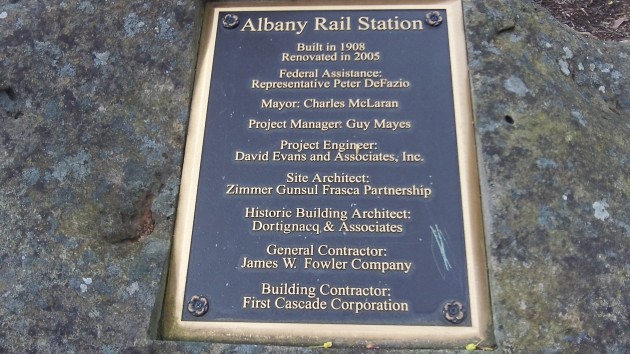 This marker at Albany Station reminds people of the big effort to rebuild the depot.

Whether letters to legislators get results probably depends on whether legislators are inclined to do in the first place what the letters request. So Albany’s plea to fully fund Amtrak’s Cascade passenger trains may do no good, but it can’t hurt.

The city council Wednesday unanimously endorsed a letter Mayor Sharon Konopa is sending to the chairmen and members of the Joint Ways and Means Committee, which writes the state’s budget.

As of last report, the committee had declined to budget $10.4 million, as requested in the governor’s budget proposal, to continue subsidizing the Cascade passenger trains between Eugene and Portland with stops in Albany, Salem and Oregon City. According to ODOT, the committee had tentatively agreed to $5 million, an amount that might force the agency to prepare to shut the service down even before the first year of the 2015-17 biennium is up.

Konopa said she understands that if the Cascade trains are dropped, Amtrak might close the Albany station, and she wonders whether Amtrak might then also cancel the Albany stop of the two daily interstate Coast Starlight trains, one in each direction.

All of which amounts to a supreme irony since ODOT is spending about $10 million in state and federal funds on a long-term planning project to increase passenger rail service in the Willamette Valley. Gov. John Kitzhaber launched the process in 2012, and it’s projected to keep going till 2017 or so. And last year ODOT took delivery of two new Talgo trainsets it had bought with millions in federal stimulus money.

In Albany, the mayor’s letter to the state budget writers says the city council strongly supports continued funding for the Amtrak Cascade service. It says that more than $9 million has been invested over the past decade in refurbishing the station “to make it a centerpiece of our urban renewal efforts.”

The letter says that most days, the station parking lot is filled with the cars of train passengers, and it adds that when gas prices rise again, as they surely will, train travel will again be more attractive.

“We believe the relatively small investment to maintain this service for the next biennium will help residents of our community and those who choose to visit here,” the letter says. “Cutting low-cost transportation options will negatively affect Albany and Oregon. Please consider restoring funding to this most important service.”

State support of the trains — and associated bus service — has been a contentious issue for decades, though not in recent years. A few years ago a state committee floated the idea of a special train tax in those Willamette Valley counties served by passenger rail, but the idea never built up any steam and went quietly off the rails. (hh)

6 responses to “Albany asks that trains be funded”