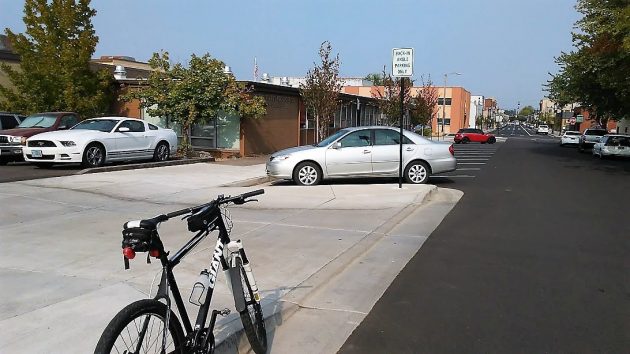 I had hoped I was through with this topic, but evidently not. The left-side reverse angled parking on Second Avenue in front of the Albany Post Office continues to stump at least some drivers, including the one who parked that silver car.

I could not help but notice this nose-in parker as I went by on the bike about 10 to 5 on Thursday. It was odd, in a way. Because for some weeks now, all the vehicles I had seen there showed that their drivers had not only seen the sign but also mastered the art of backing into an angled space on the left side of a one-way street.

Chances are there will be the occasional nose-in parker in that block for a long time to come. Why? Because reverse parking on the left is unusual, and for some people it’s near impossible because they cannot see the lines on the pavement.

The city decided on this parking layout on the grounds that experts consider it to be safer. It doesn’t seem safer when you’re stuck behind a vehicle that’s sideways in the lane while the driver goes back and forth trying to hit the middle of a space. It also doesn’t seem safer when you’re pulling out but can’t see to your right rear because of obstructions in the car, like a door post and passenger head support, or a van or pickup in the next space.

Regardless, most drivers using those spaces no longer complain. And for a few, it’s not an issue because they pull in the way they want — nose first.(hh)