A turnaround in angled back-in parking 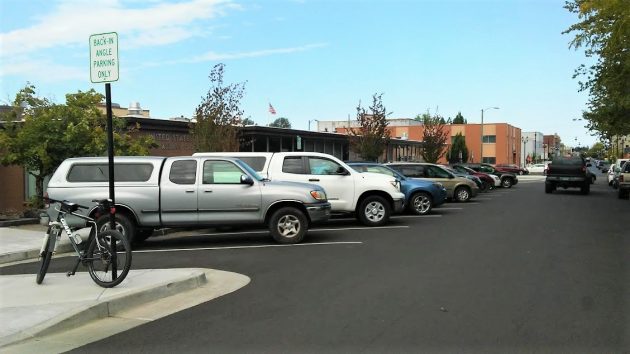 At 5:03 p.m. Thursday, 12 vehicles are backed in on Second Avenue outside the Albany Post Office.

Well, what do you know. After more than a year, the left-side, back-in, angled parking on Second Avenue in Albany may no longer be an issue

For the last two or three weeks, every time I’ve gone by there or stopped at the post office, all the vehicles were tucked into their parking slots the way the city wants them to be, back end to the curb. I didn’t see a single one that defied the system by parking nose first.

Thursday afternoon, the same thing. Almost all the spaces were taken — all of downtown was solid with parked cars because it was the first night of River Rhythms — and all 12 vehicles in the angled spaces on Second had been backed in just the way the sign at the entrance to the block demands.

I’m sure there are drivers who still don’t like this backward parking layout, which was novel in town when it was introduced early in 2017. Some drivers have a hard time getting used to it, and for some it’s a physical hardship because they can’t easily look backward over their left shoulder. These folks avoid those spaces.

Whetever the reason, I haven’t seen anybody parked there nose-in for quiet a while. (hh)


17 responses to “A turnaround in angled back-in parking”