A roadblock on Columbus N.E. 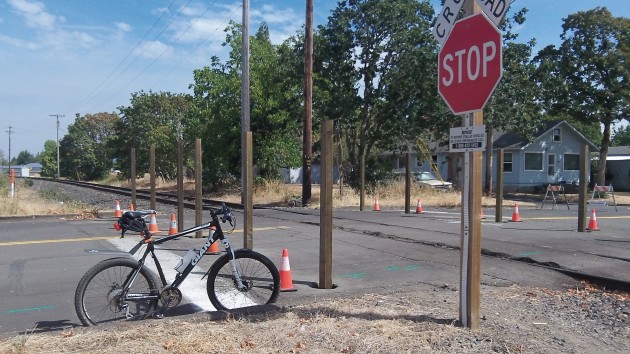 That’s the way the rail crossing on N.E. Columbus looked on Thursday.

As far as at-grade railroad crossings go, the one on Albany’s Northeast Columbus Street wasn’t exactly a busy one. Now it’s even less busy because the street has been closed where it crosses the track.

This past week, sturdy wooden posts were put in to hold the street-closing barrier, though on a bike I could still get through.

The crossing lies on the Water Avenue rail line owned by the BNSF and operated by the Portland & Western. It was being closed as part of a deal the city of Albany made with the ODOT Rail Division several years ago. Albany’s city transportation expert Ron Irish reminded me of the details.

In order to allow development of the former industrial property between the Water Avenue rail line and the Willamette River, ODOT Rail would require automatic gates at several street crossings at a cost estimated at $250,000 each, making development just about impossible. The city council agreed to close some crossings in order for ODOT to make federal funds available to pay for gates at others.

The Chicago and Jefferson street crossings were closed some years ago to make federal aid available for the Jackson Street gates at the Wheelhouse project. The Columbus closure is being accomplished now in return for improvements at Main and Hill Streets, to be done later in connection with the Edgewater Village development. (The original version of this story said the Main Street crossing improvements had already been done, which was a mistake.)

No more closures are in the works. And presumably, if or when this segment of the old Oregon Electric rail system is ever abandoned, as has been thought about from time to time, all those streets could be reopened.

The latest closing on Columbus leaves residents of the Willamette Neighborhood plenty of ways to get in and out, but there is one side effect: I will have to alter one of my routes on the bike. (hh)

Aug. 31 correction: In the original version of this story, I said the closure created two dead-end-streets, but that’s not so. On both sides of the barrier, frontage roads connect with the next street to the west. (hh) 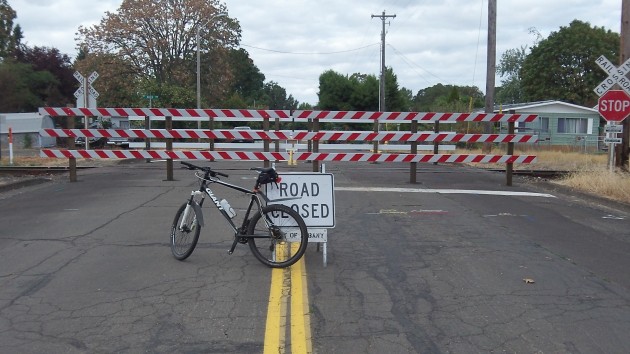 As you can see on Aug. 31, the Columbus Street closure is now complete.


2 responses to “A roadblock on Columbus N.E.”