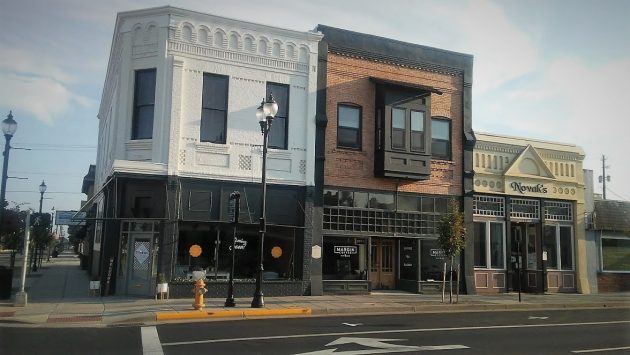 All gussied up: The southwest corner of Ellsworth Street and Second Avenue in Albany.

On a stroll in downtown Albany the other evening, the buildings on this corner caught my eye. They show off the efforts of downtown owners to upgrade their buildings with the help of urban renewal.

It’s not the only place downtown where this is the case. But it’s among the latest to be completed.

The two buildings on the left, 202 and 206, just had their exteriors refurbished. In March, the Central Albany Revitalization Area granted owner Seth Fortier two storefront restoration grants of $10,000 each. Putting up new awnings and repainting 202 was estimated to cost $21,000. For 206, the estimated price tag was $110,000. A coffee shop has opened there since.

In December 2017, the CARA board approved a $50,000 loan to help baker Jolene Wilson launch her Natural Sprinkles Co. Bakery in the corner storefront at 202, the former Tripp real estate office.

The third building from the corner, of course, is the famous Novak’s Hungarian Restaurant. In April 2014, CARA approved $200,000 in aid toward the reconstruction of the storefront and much of the building, a project then expected to cost some $800,000. The aid was in the form of a “loan” that would be forgiven in five years, presumably in the spring of 2019.

To top off this scene, the lamp posts you see are three of the many installed as part of CARA’s roughly $9 million downtown streetscape project, completed this summer after two years or work.

To the right of these addresses, and outside the frame of the shot above, there’s a former bar that, from all appearances, is being remodeled. When I left a phone message asking for information some months ago, I got no response. CARA has nothing to do with whatever is going on there. (hh)


One response to “You might call this ‘CARA Corner’”