You can buy this ‘green’ project – Hasso Hering

You can buy this ‘green’ project 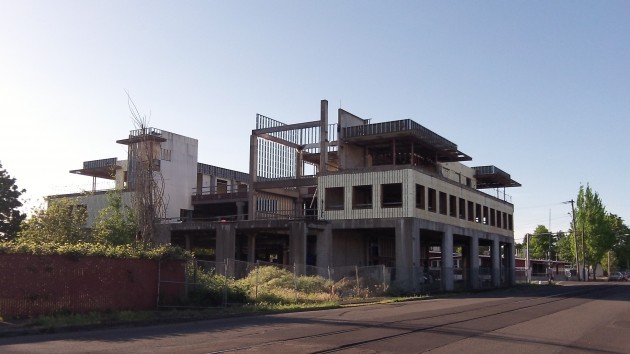 Independence Station the way it looked this May 7.

In Independence, they’re still looking at this concrete skeleton in the middle of town. More than a year since I last reported on what was intended as a showcase of sustainability, nothing seems to have happened to the unfinished structure except that it now has a sign saying it’s for sale.

A Salem developer started the project in about 2005. It would be about the greenest building around, a model of environmental efficiency, with heating and cooling powered by solar energy and biofuels. The plans called for shops and offices as well as 15 apartments projected to sell for $250,000 each.

When I passed the site the weekend before last, the building looked just as unfinished as it did in February 2015, when the city manager, David Clyne had told me the city hoped the structure would be either finished or torn down. Since no progress had been made toward either outcome, I asked if nothing could be done to get things moving.

“Unfortunately it is not city property,” Clyne replied. “Short of condemning it (big bucks), the city is pretty much as helpless as everyone else.” About a year ago the developer took out a loan to pay off a city lien for about $600,000 in systems development charges. Clyne understands the developer has less than a year to pay that off.
In the meantime, the nearly 55,000-square-foot building at 203 Monmouth St. is for sale. The online ad lists the asking price as $2,478,000. (hh)

6 responses to “You can buy this ‘green’ project”