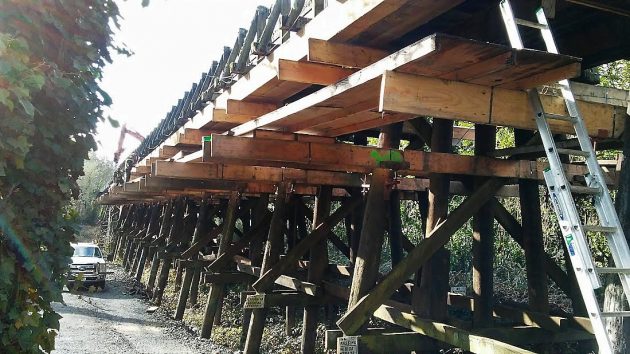 The trestle bridge repairs as they appeared on Monday afternoon, looking west from Bryant Way.

For weeks there’s been heavy construction on the Portland & Western’s long trestle bridge across the Calapooia River and its floodplain outside Albany. The work is upgrading and strengthening the structure and will probably make it last many decades more.

Much of the activity had been out of the public eye, but in recent weeks it progressed toward Bryant Park, where I could not help but take notice. I waited till one of the workers lowered himself to the ground on a bucket rig and asked him what they were doing. Replacing stringers, he told me. Trains can use the track at night, when the work has stopped.

By email I checked with Michael E. Williams, vice president for corporate communications for Genesee & Wyoming Railroad Services Inc. That’s the P&W’s parent. Here’s what he told me:

“P&W’s contractor, Hamilton Rail Construction, is upgrading the bridge by removing the three-ply stringer chords and installing a new four-ply stringer chord system.” (The stringers are massive wooden beams, evidently laminated, under the cross ties that hold the rails.)

This project, Williams wrote, is scheduled to be completed in March. It is costing the railroad more than $1 million.

I had asked him how old this section was. “The steel truss was built in the late 1800s (for steam locomotives that imparted much greater loads than today’s equipment), and the approaches were built in the 1930s, according to records,” Williams wrote.

So, if the three-ply stringers lasted about 80 years, I’m assuming the new four-ply replacements will last as long. This suggests that nobody at the P&W — or the BNSF railroad from which the Oregon shortline leases this old Oregon Electric track — is still thinking of somehow replacing or rerouting the line any time soon.

The Hamilton company doing the work is based in Coburg. Its rail division has accomplished some big and complicated projects in recent years. One was replacing the Union Pacific mainline bridge across the Willamette River at Harrisburg in 2013-14, which it managed to do while allowing both Amtrak and UP freight trains to keep to their schedules.

On its website, the company is proud of its specialty: “Building with limited and difficult project access.” This sounds like it applies to the Albany project too. (hh) 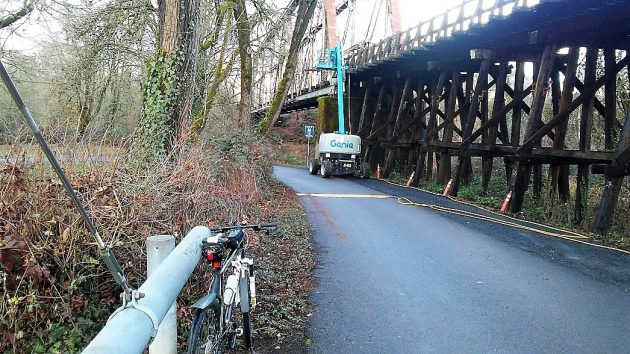 This was on Jan. 9 near the entrance to Bryant Park.