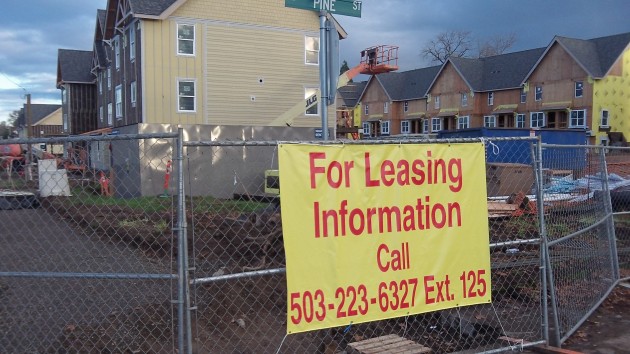 The construction site on Pine Street as seen on Nov. 29

Woodland Square is beginning to look for tenants, as the sign indicates, but by the time the first ones move in early next year, this brand new Albany apartment complex will likely have a different name.

The $10.6 million project at Pine Street and Salem Avenue has been going by “Woodland Square” because it replaces a rundown trailer park by that name. Now the developer, Innovative Housing Inc. of Portland, wants to shed any connection with that former blight on the neighborhood.

“We would very much like a new name for the apartments,” writes Julie Garver, the company’s housing development director. “Something that looks to the future and gives the place a new start.”

With that in mind, IHI is launching a public competition to come up with a new name. “People can submit names to me via email until Dec. 25,” says Garver, whose address is jgarver@innovativehousinginc.com. The company’s executive director will pick the new name, and the winner will receive $200.

But wasn’t “Woodland Square” a fitting name for the site? After all, it was heavily wooded even though the trailers were not much to look at. And didn’t IHI say it wanted to replace many of the stately trees cut down to make room for the buildings?

“Well,” Garver says, “we would like a fresh start for the property. We are concerned that the negative reputation of the past might cling if the name stays the same.”

The project will have 54 apartments and is being developed with the help of the Central Albany Revitalization Area, which contributed $1.45 million as part of its blight-fighting mission. Apartments will rent for $424 to $781 depending on size. Garver said in October that units in the first two buildings will be ready to occupy in February and those in the other three in May and June. (hh)