‘Woodland’ no more, for now 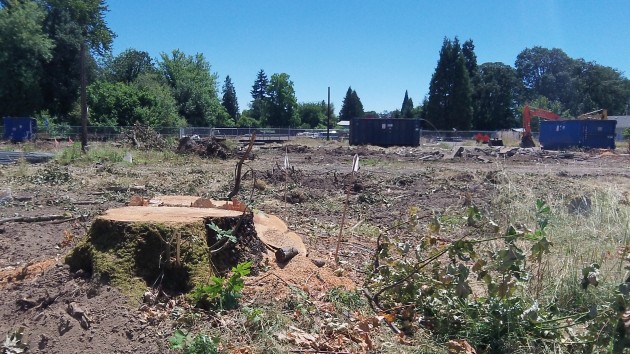 Albany’s former Woodland Square was a dilapidated trailer park but was aptly named for its big old trees. Soon it will be a new apartment complex with the same name, but for now it looks more like Stumpland Square.

Innovative Housing Inc. of Portland is developing the $10 million-plus project with help from CARA, the Central Albany Revitalization Area, plus state tax credits and private financing. It had hoped to save many of the big shade trees that gave the property its name. But when I rode past the place on Saturday, I was surprised to see mostly stumps.

In an email, Julie Garver, the project manager for Innovative Housing, explained why four big trees along Pine Street and several others in the interior of the 2-acre parcel were taken down. Here’s what she wrote:

“We were very serious about keeping those trees on Pine Street. The project was designed around them. We talked with four different arborists plus the city forester. All of them said the four trees that were taken down on Pine Street were hazard trees. They had crown die-out and evidence of rot.  Most of the trees on site had been topped many years ago, which is very detrimental to ongoing tree health and lifespan. We were very disappointed. But in the end, safety is the most important thing, and the trees on Pine Street were in the public right of way. Ultimately the city forester and the arborist decided they had to come down because of public safety…” 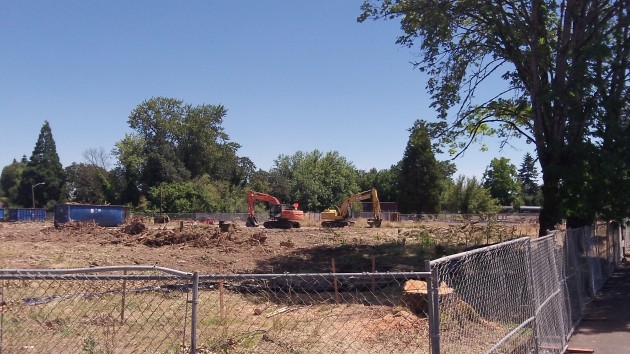 At far right, the survivors along Pine Street.

Garver continued: “We are very happy that everyone agreed that we could save the last three trees on Pine Street. It will require tree protection during construction, pruning and good follow-up care, but it is worth it! 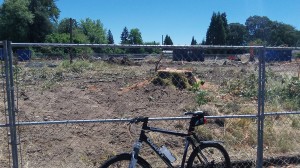 “Several trees on the interior of the site needed to be removed because they were in poor condition and would not make it through the disturbance of construction. In addition, quite a bit of parking is required for this project, and large trees do not typically do well with new paving all around them. In addition, all the ground floor units will have ADA-accessible entries with no steps. This is a great design feature and will benefit residents with limited mobility long into the future. But it did require lowering grades in the middle of the site, making it impossible to save one fir tree that we really wanted to save, because a majority of the roots would have had to have been cut away for the new grading and parking. The fir tree would not have survived under those conditions.
“One piece of good news is that we are saving several trees in the creek canyon, which we are happy about.
“It was a stressful two weeks, but we would like to thank city staff for working with us in partnership through the tree evaluation and decision process. I think everyone involved really hoped to save more trees. But the poor health of the trees, the parking required for the project and the first-floor-unit accessibility all contributed to the collective decisions about the trees.
“Our landscape architect has selected many new trees for the site, which will be good-sized to start, and will continue to grow in over the next few years.”
The neighborhood will want to keep in mind that construction sites always look raw, but that is temporary. And the thing about trees is that once planted, with a little care they grow back. There’s a good chance that in 10 or so, or even sooner, it will be Woodland Square again. (hh)
Posted in: Commentary, News
Tags: CARA, Innovative Housing Inc., Woodland Square