Another bike-related update: We’ll have to wait at least another year before Benton County restores the wide shoulders that disappeared from a section of Independence Highway last year. And yes, it does matter to everybody on the road.

The stretch of Independence from Camp Adair Road to Spring Hill Drive was chip-sealed last year. When the paint crew applied a new fog line, they inadvertently eliminated what had been intentionally wider-than-normal shoulders. The county said last year they’d fix that when applying new paint this year. But as I confirmed this week, it didn’t happen.

When I inquired, Laurie Starha of  Benton County Public Works told me that because of the volume of other work this year, they didn’t get around to restriping that section of the road, but they now have it in mind for 2017. (Benton County did repave a long segment of Independence, from Highway 20 to Camp Adair Road, and it’s now a nice and very smooth drive. No more dodging potholes.)

Does the width of road shoulders matter to anyone but people on bicycles? Yes, because while a car-bike collision almost always hurts the cyclist far more severely, it’s also a big problem for the driver. Oregon has a law requiring drivers to give cyclists enough space for safety when overtaking them on the road. A collision is evidence of a violation on its face. The wider the shoulders on our rural roads, the less likely a collision is to occur. So, wider shoulders benefit motorists as well as cyclists — and runners and walkers too. (hh) 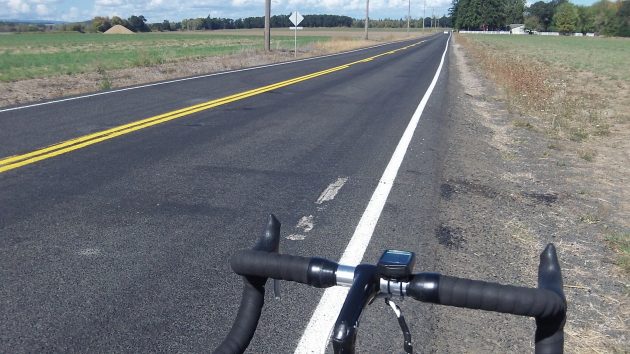 You can see where the old fog line is peeking through on Independence Highway.