Widening the rest of Riverside has to wait 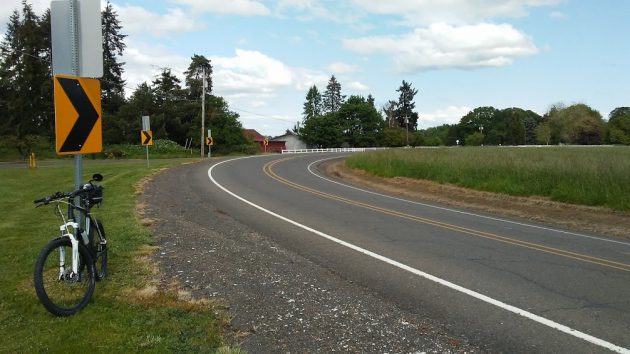 A curve in the section of Riverside Drive that has not yet been widened.

So when is Riverside Drive south of Albany going to be widened the rest of the way? Eventually, probably, but not right away. That’s the word from Linn County.

A few days ago, Jeff Senders left this comment on hh-today: “What’s new on the road widening project along south Riverside Drive? Connecting from the Grange Hall to the Hwy. 34 bike trail would be a safety improvement and also finish the job.”

You may remember that after several years of planning, the county’s contractor repaved and widened the 2.4-mile segment of Riverside from Oakville Road to Meadow Road. That $1.9 million project was finished in the spring of 2018.

The plan has always been to continue the widening all the way south to Highway 34. Besides upgrading the county road, the idea is to provide four-foot paved shoulders to serve as a safer route for cyclists to connect with the bikeway to Corvallis that ODOT built off Highway 34.

“We have delayed the next phase of the project due to a heavy work load from grant funded projects. These grant funded projects have strict timelines and the funds must be obligated within those timelines. An example is the Mill City TIGER grant we received to rehabilitate the pedestrian bridge, First Avenue bridge, and reconstruction of Broadway street. This project is in addition to several federally funded bridge projects, two Federal Lands Access Program grant projects in the Sweet Home area, and a grant funded project to add a turn lane on Seven Mile Lane at SELMET. The Riverside Drive project is still active and we are working on the design as time permits. Riverside is not a grant funded project and is being funded through regular county road funds.”

So, there’s no timetable, it appears, but at least the Riverside extension is not dead. Which is good because as you can see in the video below, the unwidened section has some narrow shoulders, a potentially dangerous drawback for cyclists and motorists both.

Until the rest of Riverside gets four-foot shoulders like the section from Oakville to Meadow, the promise of this alternative route for “active transportation” between Albany and Corvallis remains unfulfilled. (hh)


5 responses to “Widening the rest of Riverside has to wait”