Why July is a lost month 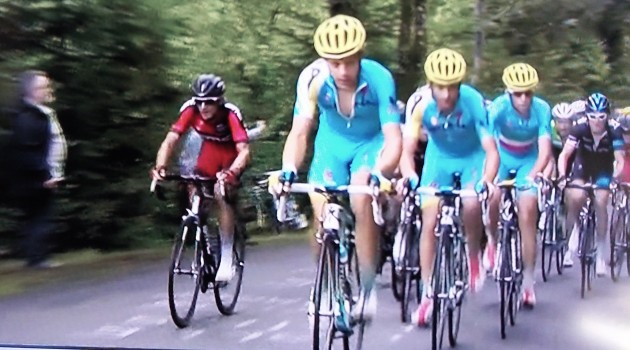 Glued to the TV: Stage 10 of the Tour de France.

This July is a tough month to get any work done, and  no, it’s not the weather. First it was the World Cup in Brazil that deserved a certain amount of attention. And no sooner was that finished, with a splendid result, it’s Bastille Day and Stage 10 of the Tour de France.

This was the day that Alberto Contador, the tough little Spaniard and one of the big favorites to win this year’s tour, was forced to withdraw from the race. He crashed and was hurt too badly to continue.

On cable, NBC Sports is carrying the race live each morning and repeats the broadcast immediately after the live coverage is done. Then there’s another repeat at night. So you can see why there’s not a lot of time for much else, especially if you want to squeeze in a ride of your own.

Why does the Tour get as much attention as it does (though nowhere as much as I think it deserves)? Because it’s the toughest sporting event I know of. Twenty-one stages of racing, most of them a good deal longer than 100 miles, through flat country and mountains, in weather that ranges from fog and rain to sunshine and blazing heat, with just two days of rest in 21 stages. (There are also plenty of bird’s eye views of the picturesque European scenery provided by the intrepid chopper crews of French TV.)

All of our team sports require talent, tactics, endurance and skill. But as far as I know none of them demands as much sacrifice and suffering at does the Tour. One segment of Stage 10 on Monday was headed skyward at a grade of 18 percent. If you want to get just a tiny, fleeting taste of what that is like on the Tour riders’ legs, heart and lungs, find a bike and pedal up a steep hill for an hour or so, and try to go fast. (hh)


3 responses to “Why July is a lost month”