Why ban weddings on farms? 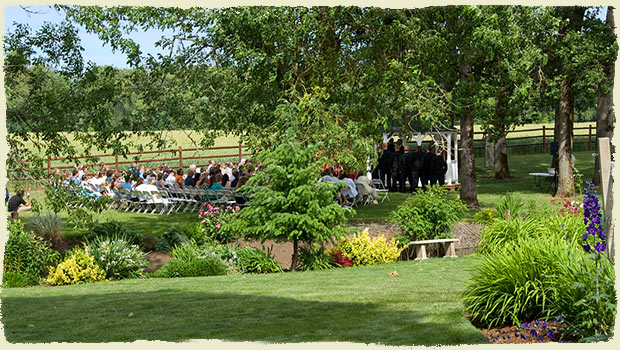 Nice place for a wedding: the Smalleys’ Whisper-n-Oaks as shown on their website.

A pending appeal in Benton County illustrates the byzantine and repressive nature of Oregon land-use laws where farms are concerned. Why does the law care whether farmers, when they’re not out there sowing or reaping, rent their yards out to someone who wants to get hitched?

Robert and Donna Smalley, owners of a 70-acre farm on the Benton-Lane county line, were holding weddings at their place and advertised online as “Whisper-n-Oaks,” which generated a complaint to the county zoning authorities. Through their lawyer, Michael Farthing of Eugene, the owners cited a section of the state and county zoning laws that allows “onsite filming” for up to 45 days a year on land in the exclusive farm use zone. Their point is that no doubt someone routinely video-records the festivities at their place, and this qualifies the events as “filming” and makes them therefore OK.

The county planning department and the planning commission refused to go along, and their denial is being appealed to the board of county commissioners, which scheduled a hearing in Corvallis for Dec. 2.

On the face of it, county officials have a point. The filming exception was clearly written into the exclusive farm use law to allow film and video productions that want rural or farm scenery. And weddings probably are not held mainly for the thrill of making a video.

On the other hand, who’s to say what amounts to a legitimate form of “filming” under the law? The law does not distinguish between “filming” a milk commercial, a murder mystery or a documentary of a wedding. All are allowed. With that in mind, you’d think farm owners could rent their place out for weddings and parties if they advertised it as a “perfect backdrop for a video of your special event.” They could include a 20-minute professional video as part of their rental package to drive home the point.

The basic question, of course, is why Oregon’s land-use laws keep farmers from supplementing their uncertain annual earnings by renting their barns or yards out for events like parties and weddings. Or why they discriminate against people on the grounds of religion.

As I learned when I read a 2010 Land Use Board of Appeals decision in a case from Jackson County, the law allows weddings and similar events on EFU land if they’re associated with houses of worship including churches, synagogues and mosques. Why religious institutions should get preferential treatment in regard to allowed activities on farmland is an open question. But if the Smalleys fail with their appeal based on filming, maybe they could open a chapel and see what the county says then. (hh)

UPDATE: As expected, the county commissioners on Dec. 2 upheld the planning director’s interpretation of the law, namely that conducting weddings as a business does not qualify as “on-site filming and activities accessory to on-site filming.” This apparently means the wedding business on that farm has to cease unless some other exception can be found. (hh)


5 responses to “Why ban weddings on farms?”