Where the water rates a ‘fair’ 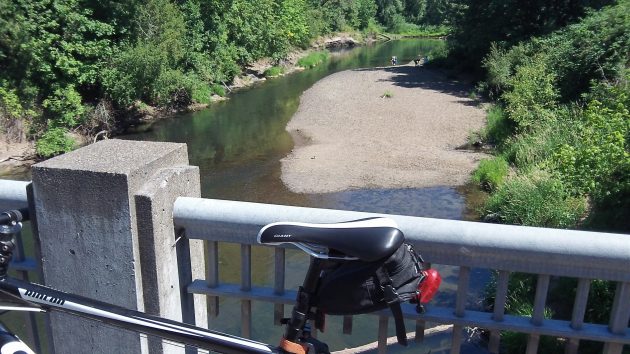 It’s not exactly Zuma Beach, let alone the French Riviera, but as an occasional swimming hole this spot on the Calapooia River upstream of the Queen Avenue bridge has its uses during the mid-valley summer. At least for a few people, as in this shot from June 30.

Looking at the picture, though, you have to wonder how the Calapooia came to merit the designation as a “river.” Seems like “creek” would have been sufficient. And in fact, according to a reference in some dusty document I saw the other day, in Albany’s early days it may have been known as Calapooia Creek. (If I remembered just where I saw that, I would tell you, but I don’t.) It’s probably the waterway’s length — 72 or 80 miles, depending on which source you believe — that qualifies it as a river.

Of greater interest than the size of the stream, no doubt, is the quality of its water. Is it safe to splash around in there, or even take a dip? You can’t tell for sure because there is no constant, real-time monitoring of water quality. But according to the latest available report from the Department of Environmental Quality, the Calapooia at Queen Avenue rated 84 in 2012 on the DEQ’s “water quality index.” That was one point better than the year before on an index that goes from 10, which is bad, to 100, which is excellent. The numerical rating on the index earned the little river’s water quality a grade of “fair.”

The index is a composite of eight parameters (temperature, dissolved oxygen, biological oxygen demand, pH, total solids, ammonia, phosphorus, and bacteria). So it doesn’t say much about each one, including bacteria, and the users of this pleasant spot might want to keep that in mind. (hh)


2 responses to “Where the water rates a ‘fair’”