Where have all the bullets gone? 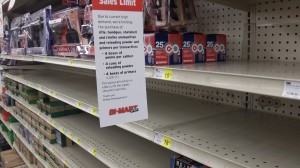 For a few months now, it’s been virtually impossible for the casual customer to wander into a sporting goods department and buy any of the common calibers of ammunition, such as .22 long rifle or 9 millimeter parabellum. The shelves have been bare, and stores such as Bi-Mart have begun to ration purchases when they have any supplies at all.

The same thing happened after the first time Barack Obama was elected, even though then there was no incessant talk of gun controls. Now, not a day goes by that the news does not report on the president and Democrats in the U.S. Senate pushing for restrictions on certain types of rifles, and on magazines holding more than 10 rounds.

But why that news should prompt buyers to stock up on small-caliber ammunition is hard to see. One theory is that gun nuts are buying up ammo so they can use it for barter later on, when gun restrictions have been imposed. But that makes no sense. If the government is going to create a black market for certain rifles and magazines by banning them, the illicit sellers of such items will want hard cash, not a few bricks of twenty-twos.

It’s not just ammunition that is flying off the shelves; the same is true of firearms. So regardless of the motivation behind it all, one conclusion is obvious. With their proposals, the proponents of lessening Americans’ ownership of guns and ammo have achieved, so far, the exact opposite of what they want. (hh)

From Ted Salmons, via Facebook: Guns and ammo sales.  The only businesses Obama’s policies have actually stimulated.