Where a bicyclist was killed 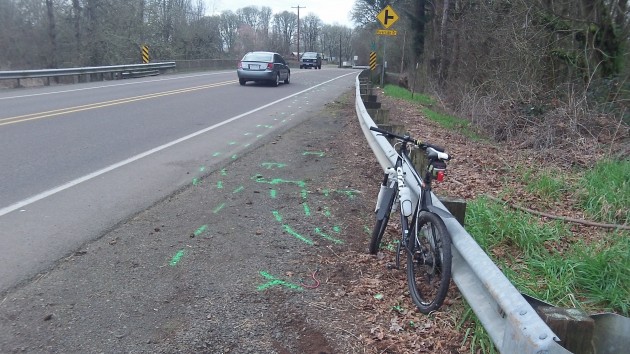 On Wednesday my bike is parked at the spot where a fellow cyclist was killed Tuesday.

The roadside spot where Albany bicyclist Grant Keith Garner died on Tuesday is on one of my regular bike-riding routes, and I extend my heartfelt condolences to Garner’s family and others who knew him. As an accident it was an unusual one, but the crash that killed Garner, 60, shows why cyclists wish there were more off-highway pathways of the kind the Benton County Planning Commission has now rejected.

Garner was on his bike on Tuesday afternoon not for fun or exercise but to get home after work. The Democrat-Herald reported he had lost an eye as a boy and could not get a driver’s license, so he rode the bus back and forth to Corvallis and got on his bike to complete the commute to his home off Riverside Drive.

At about 5:45 Tuesday afternoon, a car coming the other way, driven by a 24-year-old woman from Corvallis, failed to make the curve on Oakville, caromed back and forth and hit Garner on his bike just as he was about to start crossing a bridge across an unnamed slough. (Not the Calapooia River, which is farther east.) If he saw the car coming at all, it was probably too late to bail out toward the right. In any case, a guardrail there would have blocked him in. On Wednesday there was a fragment of a bike’s taillight on the ground just where the guardrail starts.

Highway signs recommend 30 mph as the safe speed for motorists to round the corner where Oakville turns east in one direction, to become Queen Avenue, and south in the other. (Motorists know from experience you can go 10 mph faster than those yellow warnings and still be fine.) The sheriff’s office said that “speed has not been ruled out” as the reason why the car, a 2000 Subaru Legacy, went out of control.

Bicyclists are aware of the possibility of being mowed down by passing traffic, which is why the proposed path away from Highway 20 between Albany and Corvallis was so popular among the cycling community. On Tuesday night the Benton planning commission unanimously rejected a conditional use permit sought by Benton County, and it looks to me as though this project is now dead. Appeals won’t do any good, because the reasons for which the path was rejected — mainly the disruption of farm operations along the way — will be just as persuasive to the Land Use Board of Appeals if it goes that far.

A direct Albany-Corvallis path is still a worthy goal, but another route will have to be explored. Meanwhile, a secondary Albany-Corvallis bike route is closer to reality. Linn County is preparing to widen three miles of Riverside Drive next year, and ODOT this summer will extend an off-highway path along Highway 34 to Riverside. Then Linn can work on the rest of Riverside. The result eventually will be safer than what’s there. But as we have seen, unfortunately, bike lanes along highways leave cyclists exposed to deadly force. (hh)


9 responses to “Where a bicyclist was killed”