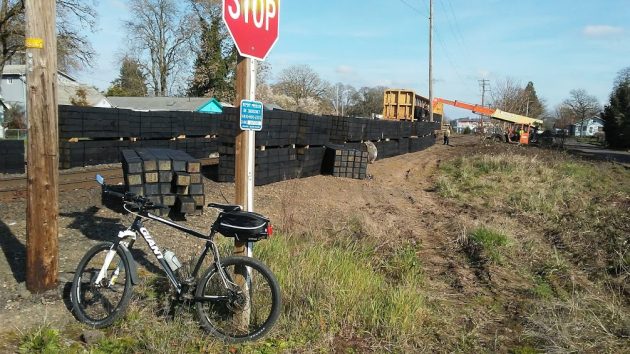 Stacks of new rail ties are off-loaded along the track near Burkhart Street on Wednesday.

As I was heading east on First Avenue Wednesday, a peculiar smell in the air made me wonder if there was a fire upwind. Then, after a left on Columbus and another left on Water, the nature and the source of the odor became obvious: Creosote fumes from batches of new railroad ties being stacked along the Portland & Western track.

The railroad evidently is preparing for another round of track maintenance on the old Oregon Electric line from its Millersburg yard south toward Eugene. The railroad, a subsidiary of the Connecticut-based Genesee & Wyoming holding company, also stored a similar number of ties in the same spot in February 2019. After a few weeks, those stacks were gone.

I tried to learn just where this latest batch was going to be installed. No luck, though. “The ties are staged there for… well… a tie replacement program,” spokesman Mike Williams of Genesee & Wyoming responded by email. “Just part of the regular capital investment in maintaining our infrastructure.”

Wooden railroad ties are treated with creosote, a coal tar product, to protect them from weather, insects and rot. As for the odor, when the ties are new like these, it can be pretty strong, which is why I noticed it a block downwind.

A Google search turned up two or three headlines like this one from Massachusetts, where the Berkshire Eagle reported in October 2018: “Fumes from new rail ties worry Great Barrington neighbors.”

In The Dalles, on the Columbia River, there’s been a controversy over creosote odors coming from a plant that makes railroad ties. A lawsuit by residents was settled in 2018. As of last August the Oregon Department of Environmental Quality, according to its website, was awaiting reports relating to emissions from the plant.

In Albany, the ties are stored in the railroad right of way along the east end of Water Avenue, in the 2100 block. Their odor will diminish and then be gone as the ties are put to use somewhere along the track. (hh)

This story has been edited to incorporate the railroad spokesman’s response on where the ties will be installed. 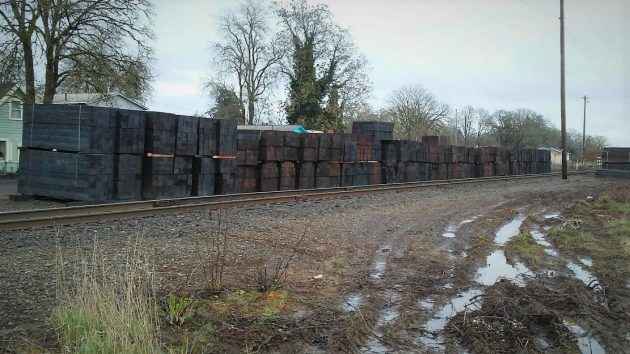 These ties were gone soon after the photo was taken in February 2019.


5 responses to “What’s that smell? It’ll soon be gone”