What’s proposed at 4th and Calapooia 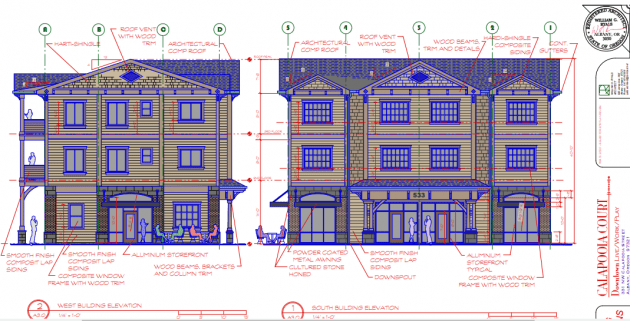 These drawings show two views of one of the buildings proposed at Fourth and Calapooia.

The Albany Planning Division on Thursday posted a public notice of the property owners’ plans for the northeast corner of Fourth Avenue and Calapooia Street, where after a prolonged controversy three century-old and dilapidated houses were demolished last year.

Owners Mark and Tina Siegner intend to put up two three-story mixed-use buildings on the corner property, with a public plaza between the buildings and parking spaces in back. According to the drawings, prepared by Albany architect Bill Ryals, the ground floor could accommodate commercial uses, which the zoning allows.

The upper floors presumably would be apartments, though the plans accompanying the city’s public notice do not say how many. (I checked the planning website around midnight, so could not call anyone for more info.)

The owners applied for a “historic review of new construction” in the Monteith Historic District, and the city’s notice announced a public hearing on the application. The hearing will be held by the Albany Landmarks Commission, which had voted against the demolition of the old houses at the corner in 2018 but was overturned by the city council, which authorized the demolition in June 2019.

Ryals is a member of the Landmarks Commission and will recuse himself from the proceedings.

The public hearing before Landmarks will be in two parts, on May 6 and 19, both at 6 p.m. and conducted remotely because of the governor’s order banning public meetings during the coronavirus outbreak. The public can take part and watch or listen online or via the phone.

To see the full application, you can make an appointment with the planning division at City Hall. Or you can ask to have copies mailed to you for a charge or provided electronically for free. (hh) 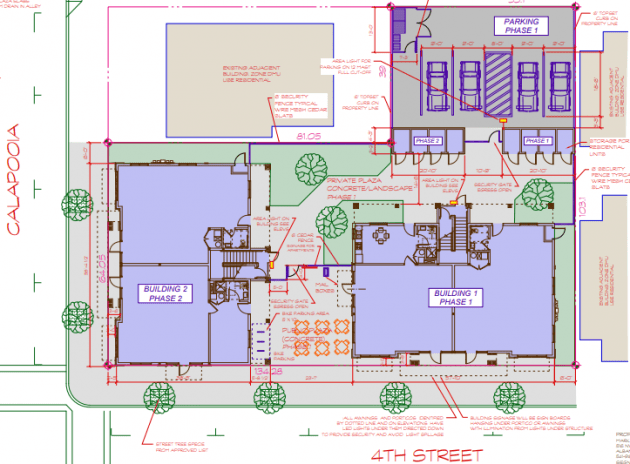 The plan for the two buildings, with a public plaza between them and parking in back.


6 responses to “What’s proposed at 4th and Calapooia”