What’s next on Pirtle Drive: Honeybees 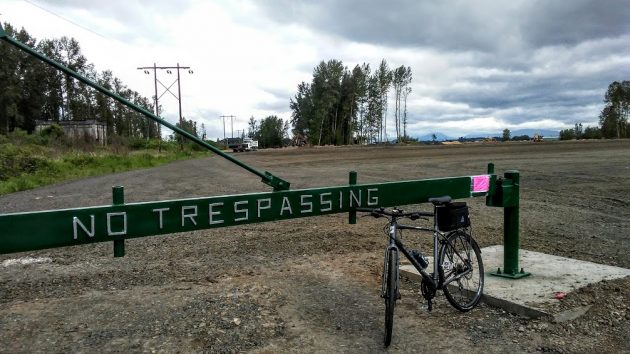 The new pad off Pirtle Drive on May 12. On the left, the old Oregon Electric power station.

Whatever industry was here decades ago, its traces are long gone. And now it looks like honeybees are coming in.

It took a while but I finally connected, by phone, with the owner of a 25-acre parcel about five miles south of Albany, where on a bike ride last week I wondered about the reason for clearing the land of trees and brush and laying down a big expanse of gravel.

The land, zoned for industry, is on the south side of Pirtle Drive, just west of the rail line built a century ago by the Oregon Electric Railway and now used by the Portland & Western Railroad.

The site is owned by Dirk Olsen, a beekeeper who runs Olsen Honey Farms out of North Albany. He told me his operation moves about 10,000 bee hives around the Willamette Valley to pollinate farmers’ fields and, of course, to produce honey.

On the Pirtle Drive site, he says he plans to put up a warehouse for his honey business. The big pad is intended to facilitate the loading and unloading of all those hives. Essentially it’s an agricultural use, in keeping with the surrounding farming country.

When I wondered about all that construction activity last week, I was hoping to get a clue from whatever on was file at the Linn County planning and building department. But when I asked, they didn’t have anything.

On Thursday, Olsen went to the county department and was given an application for a “fill and excavation” permit. When it’s filed and approved, the work in preparing the site presumably will be allowed to continue.

Olsen told me the neighbors and law enforcement had been pleased with the clearing of the former mill site because it got rid of a homeless camp and tons of debris. From some of the junk that was cleared away, it looked like people had been doing auto mechanics back among the brush.


4 responses to “What’s next on Pirtle Drive: Honeybees”