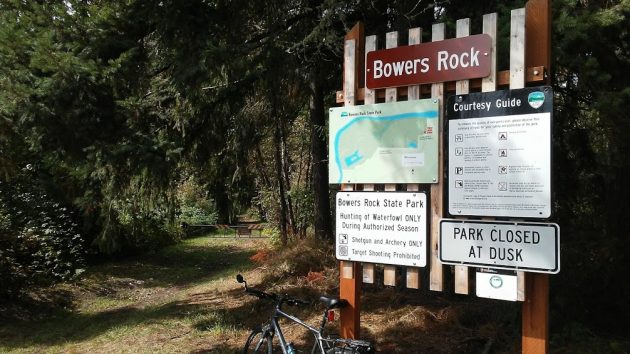 The entrance to Bowers Rock State Park on Sept. 16. The sign has been upgraded over the past year.

It’s been a year since I last took a look at Bowers Rock State Park, that 568-acre expanse of ponds, fields and brush on the Willamette River west of Albany. Is anything new there now? Yes, not much, but a little.

One thing that’s new is the sign at the entrance, past the gates at the west end of Bryant Way. It now says the name in big lettters. I also includes a helful map.

For other developments, I checked with Sarah Steele, the district manager for the Oregon Parks and Recreation Department.

The department and the Calapooia Watershed Council have been working on a Bowers Rock restoration project, the main goal of which is to reconnect natural side channels of the river. They had hoped to complete it this year, but delays in permitting caused a postponement, and they’re about to notify adjacent landowners of the delay.

“If all goes well we should be able to complete this project (by the) fall of 2020,” Steele said in an email.

“As part of the project we will be re-establishing Cherry Lane Road, which runs into the park and through the first agricuture field,” she added. “Once this is established, additional signage projects along with some trail clearing will be next to facilitate a better experience for whose who visit and are trying to navigate the property.”

On a map of the project, the re-established Cherry Lane Road is shown as a red line leading into the park from the end of Bryant Way, where the entrance sign is. Two gates there are locked to prevent anyone from driving in, but there’s a gap in the fencing to let people walk through. 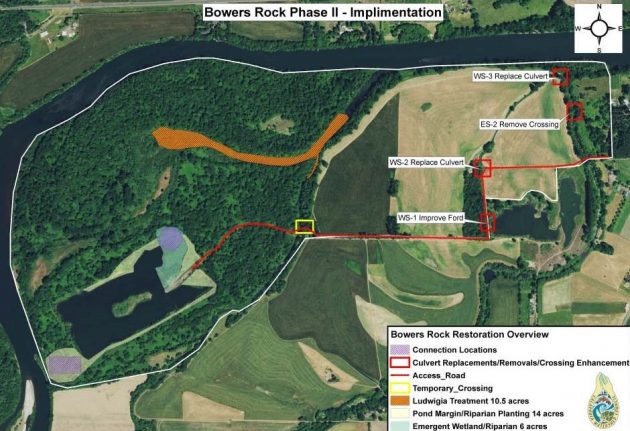 As the map shows, the road will lead from the entrance to the big pond, a former gravel pit in the southwest corner.

“In the meantime,” Steele wrote, “we are continuing to work with adjacent land owners to understand their concerns and help visitors to be mindful of those concerns. For example, we have installed additional property boundary signage to help better delineate property lines and alleviate trespass issues.”

There had been a concern about hunting, she said, and she pointed out that only “seasonally hunting waterfowl is allowed” in the park.

There is no parking at the entrance. To get there, people walk a third of a mile from the corner of Bryant Way and Bryant Drive, where unofficial road signs try to discourage public access.

But Steele has not forgotten about the access issue, even though the current park project is focused on natural resource restoration. “Once the project is completed, we will be shifting our focus to improving public access. This work should begin in 2021.”

Until then, if you don’t want to park on the side of Bryant Drive and walk 1,700 feet to the gate, you can easily reach the park from Albany by riding your bike. And once Cherry Lane Road inside the park is re-established, reaching the far pond will be an easy ride as well. (hh) 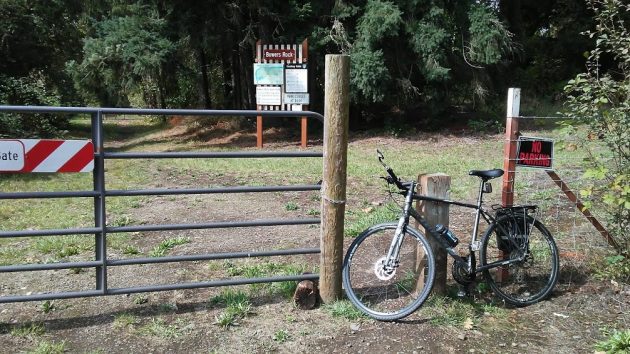 The gate blocks motorized vehicles but lets walkers through. Bicyclists too.


7 responses to “What’s new at Bowers Rock: An update”