What CARA should do 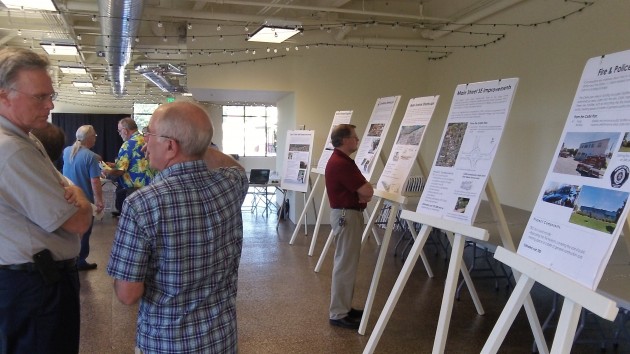 Albany’s’ city council and downtown redevelopment board are hoping to pick one or two major “public infrastructure” projects to pursue, and I’m afraid Wednesday’s open house won’t help them much in making their choice. 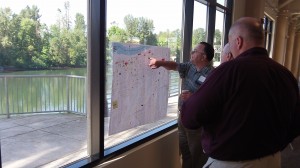 Councilor Rich Kellum and others study a map of CARA projects made by Tom Cordier, a critic of the program.

I wasn’t there for the whole three hours at the riverfront Wheelhouse. But during the first hour and near the end, when I did drop by, attendance was sparse and consisted mainly of the usual suspects, a smattering of city officials, members of the advisory board, two longtime critics of the program, and perhaps a couple dozen private citizens interested in the economic revival of the center of the town.

They were asked to rank half a dozen potential projects: Enhancing the riverfront Dave Clark Path with viewpoints and such; beautifying the “downtown streetscape;” doing the same along various segments of Water Avenue and Main Street; expanding Monteith Riverpark eastward into a parking lot; and paying for all or part of a new downtown fire hall and a new or remodeled and enlarged police headquarters.

From my point of view, I’d like to see Second Avenue between Washington and Lyon improved the way First was when the Central Albany Revitalization Area first got started. That would tie downtown together more and maybe encourage investment in buildings and businesses on Second. I’d skip all the other streetscape projects for various reasons. Water Avenue can’t be substantially improved until that segment of the old Oregon Electric rail line is retired. If the riverfront path attracts a lot more people, it will be useless as a bike route. And the Monteith expansion wouldn’t be much of a park, cut off from the main park by the senior center while taking away parking needed on many occasions.

The police and fire stations don’t strictly fit the economic revival mission of the renewal district and would be more properly funded by a bond issue, as the city council proposed last year.

If it was up to me, I’d look for a public project to enhance the entire residential neighborhood east of Lyon Street. One thing that might do the trick is to pour a ton of money into street reconstruction so that would-be new residents and builders would get the idea that the district is coming back.

I have no idea what the open-house rankings of the various projects will turn out to be. I assume the CARA board will recognize the limitations of such events. Their results are rarely in line with what the public in general wants. So the renewal board is on its own. (hh)


4 responses to “What CARA should do”