What? A traffic jam here? 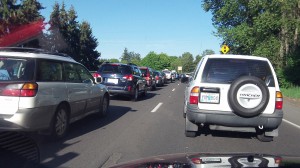 It was stop and go on the way into town.

One of the many reasons many of us live in the mid-Willamette Valley and stay here is that we seldom get stuck in traffic. So it was with some surprise that driving into Albany on Friday night, it was stop-and-go on Highway 20 headed for the Ellsworth Street Bridge.

Now I know that if congestion is going to happen, this is one likely place when lots of drivers return from Corvallis in the late afternoon. The problem, I think, is with the traffic signals on First, Second and Third Avenues downtown. They are the old-fashioned kind, set for certain intervals, and the timing doesn’t vary regardless of whether traffic is heavy or light.

This is aggravated by the fact that the right-hand lane coming off the bridge into town sometimes has to stop even when it has the green light. That’s because a pedestrian or two has chosen to cross the street at the light, keeping any drivers from turning right, as a good many of them hope to do. So they have to wait, and all the vehicles behind them wait as well.

Now normally, pedestrians are a rare sight in downtown Albany, the efforts of urban renewal and the downtown association to the contrary notwithstanding. But on this Friday, a “wine walk” downtown attracted a crowd, and many of them insisted on blocking right-turning traffic by crossing First Avenue at the light at Ellsworth and First. If large numbers of people on foot ever become the rule downtown, something will have to be done about those lights. (hh)

James Carrick responded on May 4:  I can remember when there was a short (2-3 cars long) right turn lane at the foot of the Ellsworth bridge, but it was removed some years back. Perhaps restoration of that lane would help the problem.

Jodie Bowens Shilling responded May 4, via Facebook: A little off topic, but just as important is that I think people are forgetting that the speed limit coming into town from North Albany there, is 25 mph, not 45 mph. There seems to be some road rage if the leader of the pack isn’t going at least 35 – 40. It’s very frustrating. Just my .02.