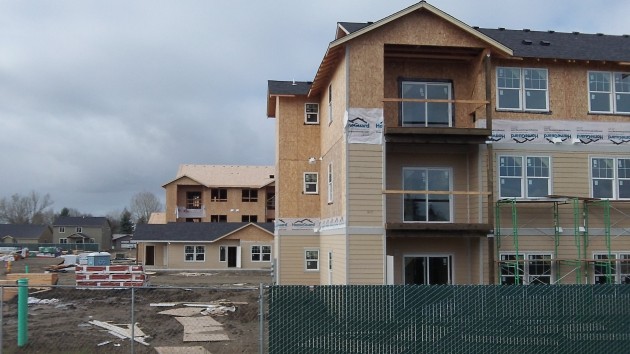 A view of two of the apartment blocks and the recreation building at the Plum Tree site Thursday. 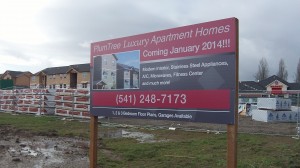 Work may resume as early as Friday on a 90-unit apartment complex in South Albany after being shut down for nearly two months because of an expired wetlands permit. The eight apartment buildings on the 3.9-acre site, at 34th Avenue and Hill Street S.E., have been sitting unfinished since early December when construction crews had to stop work because of an oversight with permits.

A previous owner had obtained permits to disturb wetlands on the property from the Department of State Lands and the U.S. Army Corps of Engineers and paid into a wetlands mitigation bank (an estimated $60,000 an acre). But the permits expired after five years and only the state permit was renewed as the result of an oversight, according to developer David Montagne of Portland.

Even though the site had already been built on, Montagne said under federal law work had to cease until the Corps issued a new permit. This required a “biological assessment” of downstream waters even though the property is not on any creek. It was frustrating, he admitted, but after he got the Corps permit in Portland Thursday, he sounded like a happy man and said things were now “back on track.” He expected his crews could be back on the job by Friday. The work might have stopped anyway, he reflected, during the deep freeze in December.

Montagne now expects the project, the “Plum Tree Luxury Apartments,” to be completed in two months’ time. The project has an overall value estimated at about $10 million, based on city building permits. The 90 units come with one, two or three bedrooms. Garages are available, and the plans call for 164 parking places.

Also held up by the permit situation was construction of several single-family houses that Hayden Homes is building on the Hill Street side of the property. Meanwhile, the city community development department on Thursday approved a site plan for two more apartment buildings totaling 24 units on part of the property facing 34th Avenue. This part of the site had originally been set aside for commercial space. (hh)