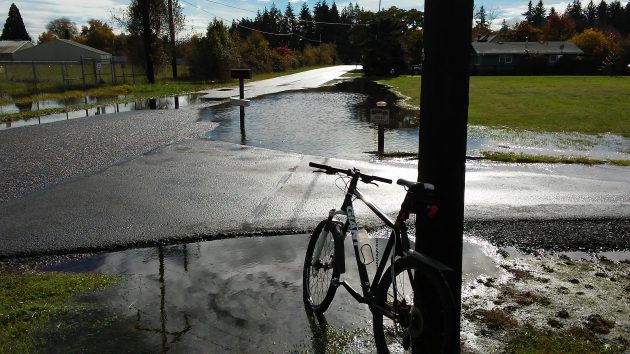 A federal report from 1984 may contain a clue to the cause of what a neighbor calls the “Broadway Reservoir” in Albany. It shows a drain line from where the localized flooding has appeared this rainy fall on Broadway Street, leading about 300 meters northwest to an outfall on Queen Avenue. I’m no engineer but I know water runs downhill, so if that pipe still worked the water would not pool on both sides and sometimes on the street.

I wrote about this drainage issue on Wednesday because it happened to coincide with the Albany City Council action to form a storm water utility, an instrument that starting next spring will collect a rain tax from water and sewer customers inside the city.

On Thursday, there was more water on the street and a nearby driveway than the day before. The water is coming off a vacant grassland that used to be known as the Back Forty of the former U.S. Bureau of Mines, now the Department of Energy’s Albany Research Center. Wednesday’s story drew a comment that included a reference to plutonium as a possible contaminant on the Back Forty. That’s what sent me in search of more info.

In 1984, it turns out, a division of the Argonne National Laboratory published a long report of an evaluation of the Albany center under FUSRAP, which stands for Formerly Utilized Med/AEC Sites Remedial Action Program. In summary, the report says, researchers found traces of uranium and thorium in the water and soil, as well as a concentration of plutonium 238 five times background level at the point where a tile field exits the Back Forty.

“The actual concentrations that were measured are not considered hazardous,” the report concludes. “However, they are indicators that the contamination is from many different sources and that it is migrating from the soil into the drain-tile system and subsequently off the site.”

This drain tile system, according to the report, was installed in 1967 by the Soil Conservation Service “for an Albany High School project to reduce the soil moisture and to alleviate the subsurface drainage problem.” There’s no hint why Albany High wanted the federal field drained, but obviously there was no hassle about leaving wetlands alone at the time.

A map in the report shows the drain field leading all the water to the place where it is now popping up above ground. That map and another one also show the “main tile drain” crossing Broadway Street and heading off toward the northwest.

Broadway is a county road, and Linn County Commissioner Roger Nyquist said in a comment on Wednesday’s report that the county understands the federal research center is aware of the problem and has kicked it up the chain of command for a response. But if the maps are right, the potential fix may have to be made not on the federal Back Forty but in the drain line from Broadway to Queen. Get the water flowing in that pipe — if a pipe it is  — and the surface flow on Broadway should cease. (hh)