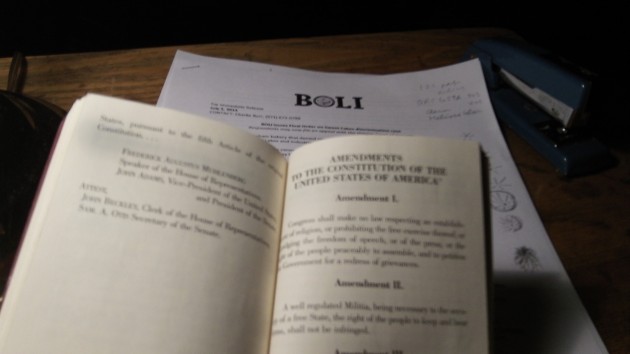 The First Amendment was mentioned by the Supreme Court but not by BOLI , the Oregon Bureau of Labor and Industry.

Oregon law, according to Labor Commissioner Brad Avakian, says that if you make cakes as a business, you must make one for a gay wedding even if you oppose gay weddings. But you don’t have to be quiet about it. The First Amendment protects your right to speak out, as affirmed in the same-sex marriage ruling the Supreme Court delivered last week.

On July 2, Avakian ordered a former Gresham bakery, Sweet Cakes by Melissa, to pay a lesbian couple $135,000 for declining to bake them a cake for their wedding in 2013. The money is to compensate the women for emotional suffering.

“This case is not about a wedding or a marriage,” Avakian claimed in his order. “It is about a business’ refusal to serve someone because of their sexual orientation. Under Oregon law that is illegal.” But Avakian is wrong about the nature of the case. It is about a cake for a wedding, nothing else. If the women had ordered a birthday cake, Sweet Cakes would have made them one regardless of their sexual orientation. What the husband-and-wife shop declined to do was to make a cake for a same-sex wedding, which at the time was not even recognized in Oregon.

Avakian also ordered Aaron and Melissa Klein to refrain from future violations by “communicating” that they would not make gay-wedding cakes. Some took this as a gag order against the Kleins. As for that, the Supreme Court opinion comes in handy as a guide.

Writing for the five-judge majority that discovered a constitutional right to same-sex marriage in the 14th Amendment, Justice Anthony Kennedy also wrote: “Finally, it must be emphasized that religions, and those who adhere to religious doctrines, may continue to advocate with utmost, sincere conviction that, by divine precepts, same-sex marriage should not be condoned. The First Amendment ensures that religious organizations and persons are given proper protection as they seek to teach the principles that are so fulfilling and so central to their lives and faiths, and to their own deep aspirations to continue the family structure they have long revered. The same is true of those who oppose same-sex marriage for other reasons.”

Setting aside Kennedy’s overwrought language, it’s safe to say that the First Amendment overrides whatever the Oregon labor commissioner decides citizens can “communicate” about their beliefs. So what might bakers opposed to same-sex marriage do to stay within the law? They could put up a sign: “Cakes for any occasion you want. But just so you know, we oppose gay weddings as a matter of principle, which is our right. The Supreme Court just said so.”