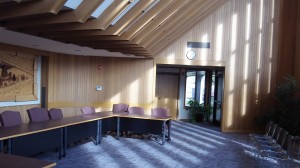 Light and airy: Where the Millersburg City Council meets.

(Please note the March 24 update below.)

There’s a website titled millersburgcitypower.com. It purports to help residents follow the process as the city council considers expelling Pacific Power and taking over the electric facilities in the town. The material on the site amounts to arguments in favor of this move, and the city of Millersburg should either shut the site down or make it impartial.

The website has a link that points readers to “public records” regarding the proposal. As of late Saturday, the “public records” shown there were three in number. Two were reports by Cable Huston, the Portland law firm hired to push the public power proposal. The other is a report by D. Hittle and Associates, a consulting firm, on the costs and benefits of a municipal electric utility. The Little report concludes that the benefits outweigh the costs even if the costs are higher than the consultants assume.

That’s the lot of the “public records” shown on the site. Where are the letters or statements from Pacific Power to Millersburg contesting the consultants’ conclusions about costs and benefits? And where is the ruling this month from the Bonneville Power Administration, a ruling that casts doubt on Wah Chang’s ability to benefit from BPA’s cheapest tier of power, an ability on which this whole proposal rests?

The city administration, meaning the council and Mayor Clayton Wood, may not be in control of what the “Millersburg City Power” site contains. But if they are, they should insist that the site include all the public records on this issue that the city has. (hh)

The spelling of D. Hittle and Associates has been corrected in this version of the story. (hh)

Since this commentary was published, the Millersburg public power website has been augmented with relevant material from the Bonneville Power Administration and Pacific Power. It now gives readers a more complete picture of some of the issues and arguments involved. (hh)


One response to “Web: One-sided on Millersburg power”