Want to buy an old church? 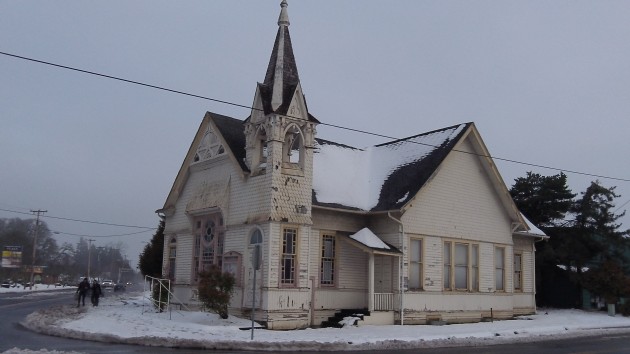 The old Cumberland Presbyterian Church at Main and Santiam in Albany.

If you’ve always wanted to spend tons of money on acquiring and restoring an old church, here’s your chance. The city of Albany plans to invite proposals along those lines for a building at Santiam Road and Main Street, which the city bought for a road project but now doesn’t need after all.

Albany bought the historic Cumberland Presbyterian Church in 2000 for $150,000 because officials thought part of the property would be needed for the right of way to improve the Main-Santiam intersection and rebuilding the nearby intersections of Main Street  with Third and Salem Avenues. The design of that project, to be constructed in 2014, has changed to a round-about, and the church property won’t be needed. The property is now surplus, and on Monday the city council talked about what to do with it.

The church has been vacant for years, and the city says it has spent about $5,000 on basic maintenance for each of the last two years. Chris Bailey, assistant public works director, estimated that fixing the building to make it usable would take around $100,000.

The city has already received three offers, but details were not disclosed. Bailey and economic development director Kate Porsche recommended that the council consider not just the best price but also the potential uses. Some of the proposals involve financial help from CARA, the downtown urban renewal district, which includes the property.

Chances are the city will have to dispose of the property at a loss, according to a staff memo, which said: “It should be recognized that staff anticipates the costs a private owner will incur to repair and restore the structure will make it difficult for the city to recoup the original purchase price the city paid for the property in 2000.”

The city staff will prepare a formal invitation for proposals for the council’s review. And before the council sells the property, a public hearing will be held. (hh)

2 responses to “Want to buy an old church?”