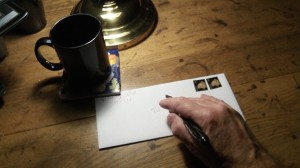 The NSA can’t hack into the contents of this.

Revelations about the vast extent of surveillance by the National Security Agency drive home one point that’s been made many times but deserves to be made again. When we engage in electronic communication, we cannot count on privacy. In fact, if the communication is sensitive or could be embarrassing, we should expect that its confidentiality will be breached. But there’s a way we can be pretty sure our communications are safe from prying eyes.
The Internet has connected the world. That means everyone using can be connected to everyone else, whether we as individuals understand this or not. It’s been reported now that the NSA has been reading the emails or texts of the president of Mexico and his top officials, as well as the communications of the government of Brazil, not to mention our European allies.
Evidently they can listen in on anyone and everyone, and apparently to a large extent they do. For the average citizen, the implication is clear: If you want to communicate in private, don’t use the Internet or a phone. If you want to tell someone something that others should not see, go see the person and talk face to face.
If that’s impossible or impractical, write a letter and put it in the mail. Technology may enable the government to run surveillance on hundreds of millions of people in this country and around the world, but even if it had the legal right to do so, our government has not enough snoops to steam open and copy all the mail we could send. (hh)