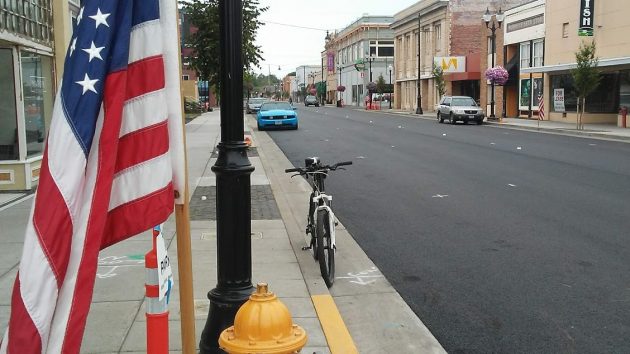 Not much traffic on newly rebuilt Second Avenue on the afternoon of the 4th of July.

It’s been weeks since traffic could flow unencumbered through downtown Albany as seven blocks of two streets were reconstructed, one by one.

On Independence Day, though, the last of the barriers had come down. Second Avenue was open again from Washington Street to Ellsworth. The only thing left was to apply the stripes and other pavement markings.

Back in April, the city council and others on the advisory board of the Central Albany Revitalization Area decided to spring for a full reconstruction of seven blocks of Second and Third avenues, rather than a less thorough repaving job. This added $444,000 to the cost of the city’s “streetscape” contract of $7,637,700, the CARA board was told at the time.

The job called for seven inches of asphalt over a 12-inch layer of rock. The new streets now are expected to be in good shape for at least 20 years. Also as part of the job, the center crown of these streets was flattened.

The new section of Second was the last to be finshed. On the bike on Wednesday, it certainly felt smooth. How smooth? Well, as smooth as new asphalt. Here, take a look (hh):