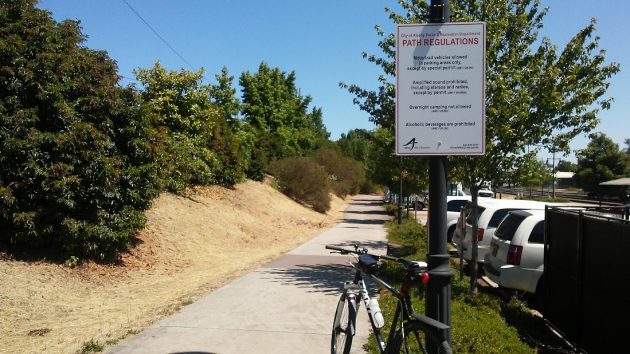 The rules are plainly posted at the path entrance near Albany Station.

Applying park regulations to a path is one thing. Making them stick is something else. Take a look, for example, at the path alongside the Union Pacific right-of-way from Albany Station to Swanson Park. Take a look and be dismayed.

In April, the city council adopted a resolution declaring the path and one on the other side of the Pacific Boulevard viaduct to be part of the Albany park system. The idea was that park regulations would then be applied, and this would make it easier for the city to keep camping and carousing along the path under control.

Signs headlined “Path Regulations” have appeared at the path entrances. No motorized vehicles except in “parking areas only.” (There are no “parking areas” on the paths.) No amplified sound, including stereos and radios. (Do people still have boom boxes?)

The biggies: Overnight camping is not allowed. Alcoholic beverages aren’t either.

Maybe it wasn’t overnight, but there is ample evidence of camping, evidence left behind by people not accustomed to cleaning up after themselves. The corridor along the railroad track has become a dump for all manner of trash, mostly the stuff that comes with eating and living outdoors. And under the overpass, the path is still a place where taggers, evidently undisturbed, leave their ugly work.

The public spent about $384,000 to build the path along the tracks to that kids from distant parts of town could easily reach the Swanson Park pool by taking the bus to Albany Station and then walking the rest of the way. The path also was to give people living around the park a convenient connection to the station. But without more aggressive action to keep vagrants and vandals from spoiling this path, it’s not likely to be of much public use. (hh) 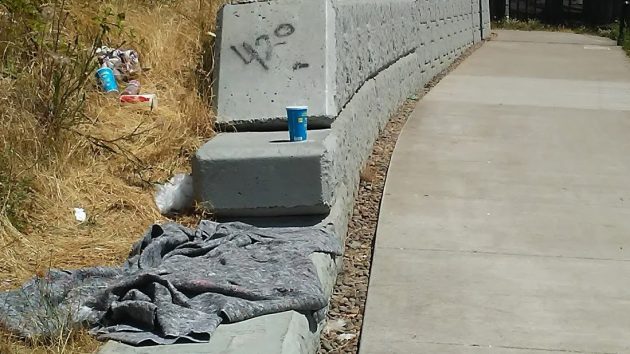 Looks like somebody had a camp here regardless of the park regulations. 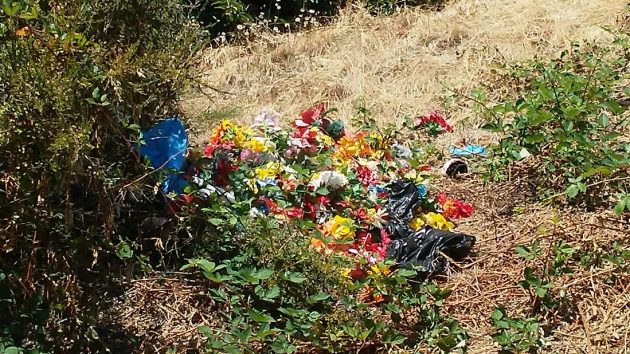 Trash near the path includes a load of some pretty colorful stuff. 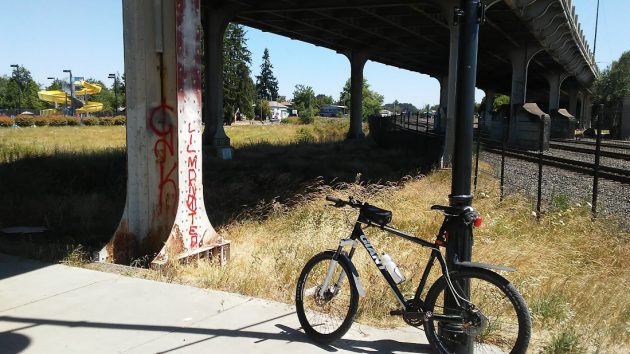 The view from the path under the overpass. You can just see the water slide at Swanson Park.