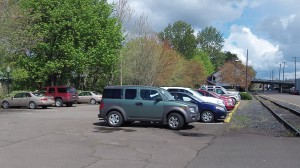 Turning this riverfront lot into a park is one CARA proposal.

The Oregon House today (May 28) is scheduled to vote on a sensible bill to correct an injustice dealing with property taxes and urban renewal, but it won’t do any good in Albany, at least not yet.

The bill is HB 2632-A. It would remove local option levies approved by voters after January 1, 2013, from the division of tax revenue for standard-rate urban renewal plans. Until now, in urban renewal districts such as Albany’s, property taxes levied on increased value since the district was formed — in 2001 in Albany’s case — is diverted to urban renewal. This includes local option tax levies voters have approved for law enforcement or any other purpose.

The upshot is that voters may feel misled. They approved money for a certain purpose, and the tax laws have diverted it to something else. The pending bill would fix this, but only for newly approved local option levies. Albany’s police and fire levy has five years to run starting this year. So for the next five years, money specifically voted for fire and police protection will help fund activities of CARA, the Central Albany Revitalization District.

You’d think legislators would have wanted to correct this kink in the law right away, but the pending bill falls short. (hh)