Update: How soon is soon? 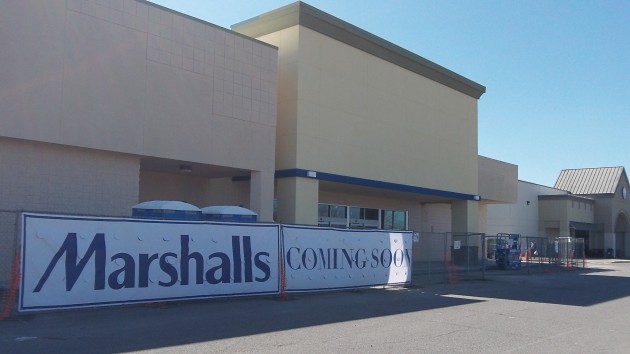 The front looked like this on March 21. Note the blue sky on the second day of spring.

An update of sorts from the retail scene: Last Nov. 13, I reported on the $700,000 worth of renovation that had just begun on the old G.I. Joe’s on Albany’s 14th Avenue S.E. The builder said on the permit application that 23,000 square feet of the 65,000-square-foot space was being finished for a branch of Marshalls, the discount department store chain, with the rest of the space being left unfinished for a future Big Lots.

Four months on, the work must be nearing completion so that, as the sign promises, the planned store can be expected to open “soon.”

I had not noticed the banner on the fencing until today when I went to the nearby Albany Public Library, but it may have been there for a while. In any case, no indication just when “soon” is. Maybe not really all that soon. The company’s website lists grand openings through May 15 in 12 states from Alabama to Utah, including six in California alone. None of them is in Oregon, though, let alone Albany. (hh)