Two-way conversion? They’ll talk about it 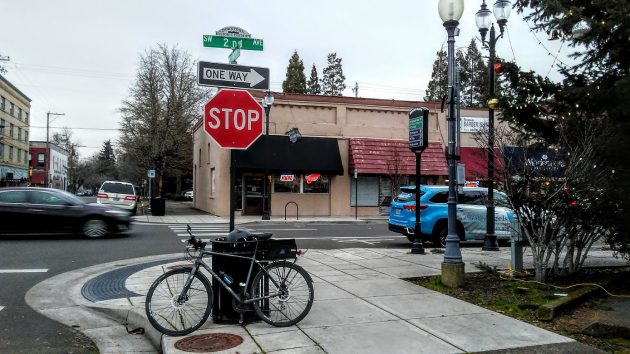 Are this and the other one-way street signs downtown ever going to disappear?

There’s a lot to consider if Albany should ever want to go back to two-way streets in the commercial section of downtown. The city’s Traffic Safety Commission will discuss it on Monday, Jan. 4.

A member of this advisory panel, Steph Nappa, brought up the topic as a possible future discussion item when the commission last met, on Dec. 7.

The suggestion was that First and Second avenues carry two-way traffic west of Lyon Street, as they did decades ago. (I regret to say I still have not nailed down when the one-way conversion took place.)

Theoretically at least, the traffic commission could eventually recommend that the city council authorize further exploration of such a move. But before it gets to that point, there’s likely to be a lot of talk about the pros and cons.

Ron Irish, the city’s traffic expert, sent the commission members an article making a point that should be obvious: Conversion to two-way traffic requires a professional study of the many competing goals. One of the conflicts is this: Slower traffic encouraged by two-way streets versus more efficient traffic movement in a one-way pattern. And there are many other issues.

“We’ll be going over the process involved in converting streets from one type to the other, potential benefits and drawbacks, and costs,” Irish advised commission members in an email.

Restoration of two-way traffic on First and Second downtown was one of the potential projects of the central Albany urban renewal district formed in 2001, but no one followed up.

If you’re interested in this discussion, you can watch the virtual meeting of the Traffic Safety Commission Monday by clicking the link on its agenda. The meeting starts at 10 a.m., and the agenda is here. (hh) 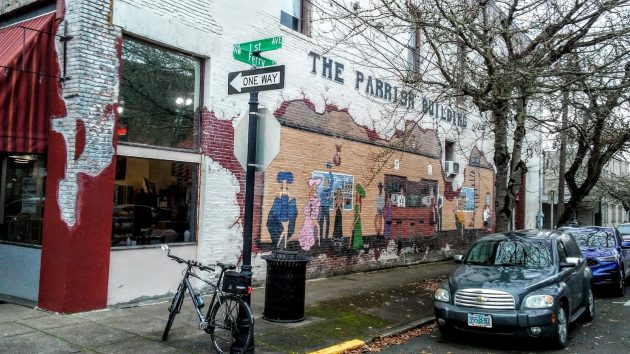 Going the other way on First. (The mural? That’s another story, maybe for later.)


13 responses to “Two-way conversion? They’ll talk about it”