Two bike routes: Where we stand 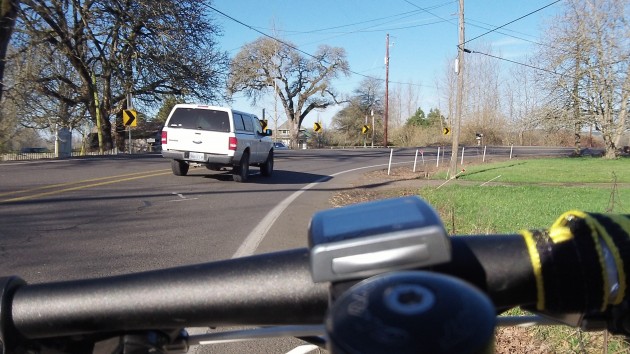 A bike’s view: This curve is on the first 3-mile section of Riverside Drive to be widened.

On the mid-valley cycling front, things have been happening on two routes. The Albany City Council has confirmed its support for an Albany-Corvallis Bike Trail, though not necessarily along the alignment that has run into strong opposition from farmers, the Oregon Farm Bureau and the state Department of Agriculture. And Linn County says it is still committed to widening Riverside Drive, but it has run into complications that may double the cost of at least the first phase.

On the Albany-Corvallis path project, the Benton County Planning Commission will, on Feb. 17, consider action on Benton County’s request for a conditional use permit to run the central 5.5-mile segment of the path along the north side of the Albany-Corvallis rail line, which would take about 13 acres of land zoned exclusively for farming. A dozen farm and landowners along the route oppose the plan.

On Jan. 26 the Department of Agriculture wrote to the planning commission raising a number of concerns about the trail close to farm operations. “While compatible with existing rail operations, many intensive agricultural operations are not compatible with recreation and public oriented land uses,” the department’s letter said. “We would suggest that an analysis of altenrative routes … south of the … railroad would be a better solution…”

The Albany council acted on Wednesday, confirming its commitment to spend $305,000 on the Albany portion of the trail in the nextfew years and urging Benton County “to work toward an appropriate and acceptable resolution of the issues.”

Meanwhile in Linn County, Roadmaster Darrin Lane has provided an update on the status of the long-planned widening of Riverside Drive, which would make it a safer route for cyclists. The first phase of the widening is to cover three miles from Oakville Road to Meadow Road.

“Unfortunately we have identified several issues that will adversely impact the cost and schedule of the project,” Lane said in an email. One is the need to identify and mitigate wetlands. Another is that if the county acquires more right of way, which will be necessary in some spots, the ground will have to be studied for Indian or other archeological artifacts.

“We are still committed to the project and have already ordered a full survey of the first phase of the project,” Lane said. No cost estimate has been firmed up, but Lane says it could be between $1 million and $1.5 million, as opposed to about $550,000 for just routine widening. “Long story short,” he concludes, “you may not see any dirt work until late summer or early the following spring.”

Riverside is part of the designated Willamette Valley Scenic Bikeway. It was the idea of Linn County Commissioner Roger Nyquist, three or four years ago, that the Riverside bike route could feed into a bike path on the north side of Highway 34 from Corvallis. At present that path ends a mile or so east of Corvallis, but if it were extended to Riverside, and if all of Riverside was eventually widened, it could make a handy Albany-Corvallis bike link of about nine or 10 miles, roughly the same distance as the planned Benton County trail. (hh)


8 responses to “Two bike routes: Where we stand”